How to eat like a caveman: the naturally GF Paleo diet eliminates all grains. 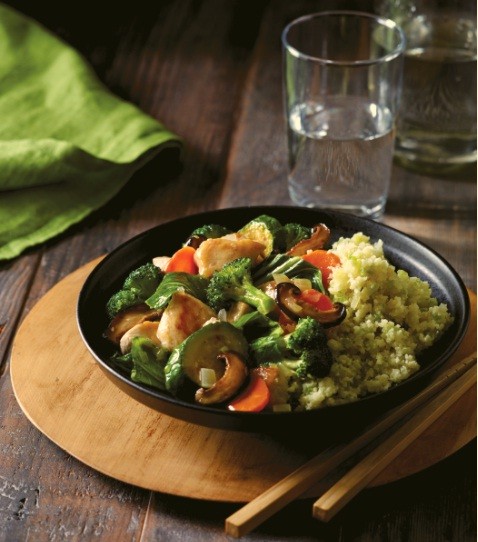 I was diagnosed with celiac disease in 1998, the dark ages of gluten free. Those who knew of celiac disease were few and far between, and gluten-free products were a rare find on grocery store shelves. When I tried to order gluten-free food in a restaurant, people thought I was part of a cult or some strange religion.

Now things are different. Gluten-free products are readily available almost everywhere we turn, though many of them are processed foods.

When I started my gluten-free diet, I avoided processed foods and ate quite a bit of whole grains. However, even a healthy gluten-free diet did little to assuage my celiac disease symptoms. I was in constant digestive distress and felt far from healthy.

Then I tried something new, taking my diet a step further: I went on a 100 percent grain-free Paleo diet. After three years of following the gluten-free diet and seeing little to no results, my gut started to heal quickly on the grain-free diet. I’ve been strictly grain-free ever since.

Instead I eat lean meat, seafood, eggs, vegetables, fruit, nuts and seeds. In place of rice, I pulverize cauliflower in a food processor to make what Paleo folks call “cauli-rice.” Instead of pasta, I serve meatballs over spaghetti squash or zucchini noodles (I cut the zucchini into noodles using a special slicer). In place of mashed potatoes, I have mashed cauliflower.

I love having guests over and surprising them by serving numerous super-food vegetable dishes along with a meat, poultry or fish entrée. They tell me they feel satiated rather than over-full. And I love that I’m replacing high-carbohydrate traditional dishes such as rice and pasta with vegetables.

On special occasions I bake foods with almond or coconut flour in place of traditional flours containing grains. Usually, though, I eat vegetables. If I have a hamburger, I use lettuce as the bun, as the Paleo diet emphasizes healthy vegetables over baked goods of any sort.

When I bake I go to my pantry for healthy seeds such as flax, chia and hemp, coconut milk, coconut oil, and various nut and seed butters. All are nutrient dense and provide more nutritional value than some of the grains they replace.

Although I rely mainly on healthy animal protein and vegetables, when I want a treat, I have recipes for bagels, muffins, breads, tortillas, cookies and more all made without any grain ingredients. Occasionally I make ice cream that uses coconut milk and hemp seed, which my teenage boys and their friends devour on sleepovers at our house. They think they’re getting “junk food,” while I’m feeding them something so healthy and full of protein they could eat it for breakfast. 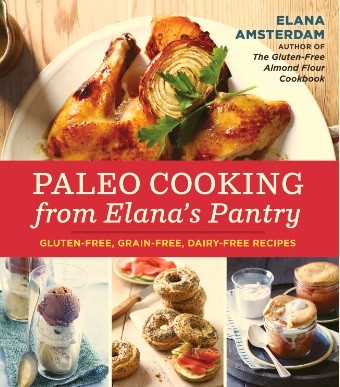 The Paleo diet is named after Paleolithic times, when people were hunter-gatherers. This was thousands of years ago, long before people cultivated rice, wheat and other crops. The idea behind the diet is that it works because it is possible that our genes may not have adapted to cope with the cultivated crops of “modern” agriculture.

A Paleo diet generally allows vegetables, fruits, meat, seafood, nuts and seeds, and does not permit grains, dairy, legumes and certain vegetable oils (such as soy, cottonseed and corn). The diet also encourages local and organic produce and pasture-raised meats. Some proponents avoid starchy vegetables, such as potatoes.

While whole grains, including gluten-free whole grains, are widely accepted as healthy and beneficial, some people, both with celiac disease and without, feel better when they avoid these grains. There are some concerns that the Paleo diet is lacking in fiber, calcium and vitamin D and may contain too much fat. But you can take steps to address these issues.

Vegetables provide fiber and protein, and the calcium and vitamin D usually supplied by dairy foods comes from increasing the amount, for example, of broccoli, cooked kale and collard greens and almonds you eat. With an emphasis on healthy lean meats and non-starchy vegetables, the diet differs from other low-carb plans that include too much fat and not enough protein and vegetables.

The Paleo diet has been growing in popularity, and many consider it a fad. But the first mainstream article on the diet, Paleolithic Nutrition by S. Boyd Eaton M.D., was published in 1985 in the respected New England Journal of Medicine.

In 2002, Loren Cordain, Ph.D., wrote The Paleo Diet, which is considered the bible of Paleo eating. By then I had already learned about this grain-free diet and had been following a strict version for about a year.

The gluten-free diet was not working for me, although I followed it religiously. Consequently, I wondered if I had refractory celiac disease, which does not respond to the gluten-free diet. As a mom of a newborn and a toddler, I needed a dietary solution that actually worked.

I have found that eliminating processed foods (think junk food) as well as grains, grasses and tubers has corrected a gut disorder that the gluten-free diet alone did little to resolve. After two months of eating like a caveman — for me that meant a very simple plant-based diet of vegetables along with animal protein — my gut began to heal. I started to feel more energetic.

I stayed on the strict Paleo diet for approximately five years. Then I expanded my dietary horizons to include treats such as chocolate. However, I remain “grain free” to this day. I also do not drink any alcohol, which is also generally avoided on the Paleo diet.

There is great debate within the Paleo community about which foods are Paleo and which are not. For example, in his book, Cordain says bacon is a food to avoid, but most Paleo chefs rely heavily on it.

Although Cordain also says starchy vegetables such as potatoes, sweet potatoes, yams and tapioca are to be avoided, most Paleo followers eat these foods regularly and consider tubers to be Paleo. I don’t eat these vegetables simply because I feel sick when I do.

One of the first things you have to recognize when you follow the Paleo diet is that there are many versions, and you have to make some decisions for yourself as you go along. But there’s universal agreement that vegetables, fruits and lean meats are indeed Paleo. A diet of vegetables and animal protein is where many Paleo followers begin, and it’s the diet recommended by Cordain.

There’s no reason to make Paleo overly complicated. In fact, the Paleo diet owes its growing popularity to its emphasis on simple food. My new book, Paleo Cooking from Elana’s Pantry, made the New York Times bestseller list in July 2013, and I find it interesting that on every stop of my book tour I’m asked, “Why is the Paleo diet the best diet?”

To be candid, I reply that it is not. The Paleo diet is what works for me, and these are the foods I serve my family for dinner each night because they are nutrient dense. Everyone eats a Paleo dinner because I only want to prepare one meal, but when my husband is at work and my sons are at school, they eat other foods as well.

This diet is perfect for me; but we all have to figure out which foods work best for our unique systems. There’s no such thing as a “one size fits all” diet.

For further information on the Paleo Diet, see the following websites:
thePaleodiet.com by Loren Cordain, Ph.D.
RobbWolf.com by Robb Wolf

Elana Amsterdam is the New York Times best-selling author of Paleo Cooking from Elana’s Pantry and has a BA in history from Columbia University.

1. Rinse the chicken and pat dry. Cut into 1-inch cubes and transfer to a plate.
2. Heat the coconut oil in a large skillet over medium heat. Sauté the onion for 8 to 10 minutes, until soft and translucent.
3. Add the broccoli, carrots and chicken and sauté for 10 minutes until almost tender.
4. Add the bok choy, mushrooms, zucchini and salt and sauté for five minutes. Add one cup of the water, cover the skillet, and cook for about 10 minutes, until the vegetables are wilted.
5. In a small bowl, dissolve the arrowroot powder in the remaining ½ cup of water, stirring until thoroughly combined. Add the arrowroot mixture to the vegetables and cook for 2 to 3 minutes, stirring constantly, until the sauce thickens and becomes glossy. Stir in the sesame oil, vinegar and honey, then serve. 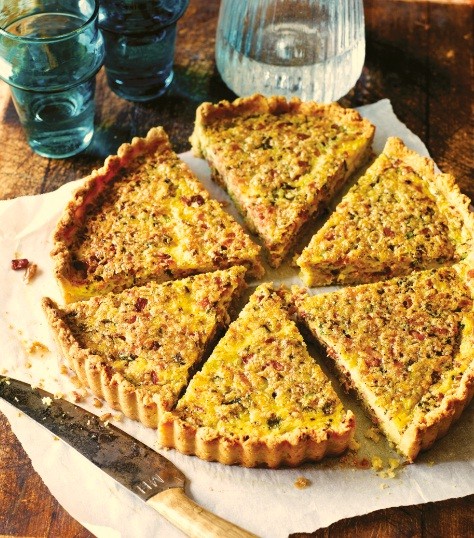 1. Preheat the oven to 350° F. In a large skillet, cook the bacon over medium-high heat until lightly browned, 4 to 6 minutes. Remove the bacon from the skillet and, when cool enough to handle, mince. Pour off and discard the fat from the skillet. Return the minced bacon to the skillet, add the scallions, and sauté for 3 minutes.
2. In a large bowl, whisk together the eggs, pepper and salt. Stir in the bacon and
scallions, then pour the mixture into the prepared crust.
3. Bake the tart for 25 to 30 minutes, until browned around the edges and cooked through. Let cool for 20 minutes, then serve.

1. Preheat the oven to 350° F. In a food processor, pulse together the almond flour and salt. Pulse in the egg and shortening, then pulse in the shallots until the dough forms a ball.
2. Press the dough evenly into the bottom and up the sides of a 9-inch metal tart pan with a removable bottom.
3. Bake for 6 to 8 minutes, until the crust is golden. Remove from the oven and let cool completely before filling.

1. Heat the olive oil in a large skillet over medium heat. Sauté the onion for 8 to 10 minutes, until soft and translucent. Add the celery and sauté for 5 minutes.
2. In a food processor, pulse the cauliflower until it is the texture of rice. Add the cauliflower to the skillet, cover and cook for 15 to 20 minutes, stirring occasionally, until soft. Stir in the salt and serve. 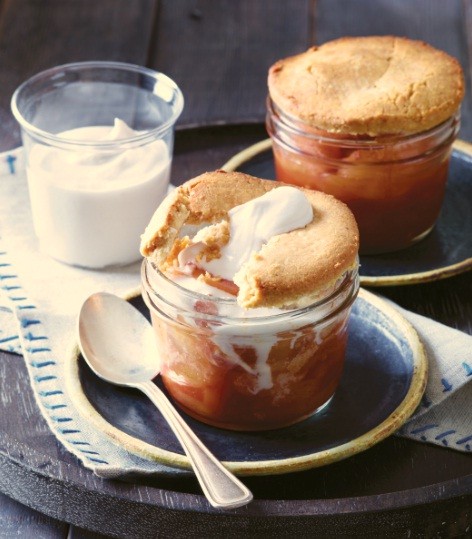 1. Preheat the oven to 350° F. Place eight 1-cup wide-mouth Mason jars on a large baking sheet.
2. To make the crust, pulse together the almond flour and salt in a food processor. Add the coconut oil and stevia and pulse until the mixture forms a ball. Transfer the dough to a piece of parchment paper and place in the freezer for 20 minutes.
3. To make the filling, place the apples, apple juice, lemon juice, arrowroot powder, and cinnamon in a large bowl, and toss to combine. Transfer the apples to the Mason jars so that each one is overfull. Divide the remaining juice from the bottom of the bowl between the jars.
4. Remove the dough from the freezer, place between two pieces of parchment paper generously dusted with almond flour, and roll out the dough ¼ inch thick. Remove the top sheet of parchment. Using the top of a wide-mouth Mason jar, cut out eight circles of dough and place one on top of each apple-filled Mason jar.
5. Bake for 40 to 50 minutes, until the juices are bubbling and the crust is golden brown. Serve the tartlets hot out of the oven.

This Week in Gluten-Free News
Advertisement