Even as General Mill’s gluten-free Cheerios hit store shelves, another of the 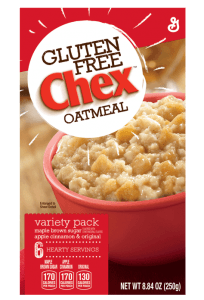 company’s oat-based products is being discontinued.

Gluten Free Chex Oatmeal will not be made any longer, according to Mike Siemienas, a General Mills spokesman. He said the oatmeal was not meeting sales expectations, and some major retailers decide not to carry the product any longer.

Final shipment will be in October, and Siemienas said he expects it will last on store shelves for one to two months.

The oatmeal, which launched in July 2014, is the only product affected. General Mills will continue to offer its Gluten Free Chex Granola Mix.

Gluten-Free Living included the oatmeal in a recent taste test, and our reviewers gave it high marks for its aroma and ease of preparation.

“Part of doing business is introducing new products and discontinuing those that are not meeting our expectations,” Siemienas said.

Kellogg’s also discontinued its gluten-free Rice Krispies cereal earlier this year, citing disappointing sales. The company had added the specialty cereal to its lineup, while continuing to make regular Rice Krispies, which are not gluten free.