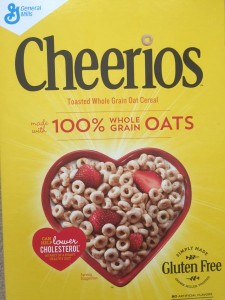 specific days in July are being recalled because they were contaminated with gluten when wheat flour was inadvertently introduced into the gluten-free oat flour used to make the cereal.

The contamination occurred when the oat flour, normally delivered by rail, was instead transported in trucks.

Jim Murphy, senior vice president and president of the cereal division, said he was “embarrassed and truly sorry” to announce  the recall.

“This recall is necessary because an undeclared allergen – wheat – with potential adverse health effects may be present in the cereals we produced on several dates in Lodi, in July,” Murphy said. “Our Lodi production facility lost rail service for a time and our gluten-free oat flour was being off-loaded from rail cars to trucks for delivery to our facility on the dates in question. In an isolated incident involving purely human error, wheat flour was inadvertently introduced into our gluten-free oat flour system at Lodi.”

General Mills learned of the problem when the company investigated two consumer complaints about illness resulting from consumption of cereal from the affected lot numbers. Testing indicated the cereal from the lots in question contained  more than 20 parts per million of gluten and did not meet the Food and Drug Administration standard for gluten-free labeling. The FDA requires that all finished products labeled gluten free contain less than 20 ppm of gluten.

This mistake occurred only at the Lodi plant, and the Cheerios and Honey Nut Cheerios produced at our other plants were not affected. Other gluten-free flavors were also not affected.

Murphy said the company’s oat supply was not the issue. “We tested our oat supply on these dates – and the oat supply tested as gluten free,” he said.

Oats used  in Cheerios have been under scrutiny since the gluten-free cereal was launched because General Mills is using mechanically processed oats instead of the specialty gluten-free oats often found in gluten-free products. The company says it repeatedly tests the oats to be sure the finished cereal meets the FDA standard. The FDA, which does not require the use of specialty oats in gluten-free products,  in late September  said it was looking into whether Cheerios is following gluten-free labeling rules. The FDA review was prompted by consumer complaints.

Mike Siemienas, General Mills spokesman, said finished product testing was not done for “a number of days,” which allowed the contaminated cereal to get out into distribution. “Testing was completed on the oat supply – and the oat supply tested as gluten free. Testing was also completed on the oat flour used at the Lodi facility – and the oat flour supply also tested as gluten free,” he said. “But finished product testing was not done on these run dates, and therefore this problem was not discovered at the time of production.”

Extensive testing of finished product is now being done. The company is also adding flour handling protocols to “ensure this kind of mistake cannot happen again,”  Siemienas said. “We will have to work harder to get back the trust of the gluten-free community,” he said.

Murphy announced the recall on the General Mills blog.

Following is the press release issued by the company detailing the recall.

Minneapolis, – Oct. 5, 2015 – General Mills is voluntarily recalling several days of production of Cheerios and Honey Nut Cheerios cereal produced at its Lodi, California facility on certain dates in July of this year because of an undeclared allergen – wheat – with potential adverse health effects. Because this recall relates to an undeclared allergen, this is a Class I product recall.

Cheerios and Honey Nut Cheerios produced on these dates at the company’s Lodi, California facility are being recalled because an isolated incident resulted in wheat flour being inadvertently introduced into the gluten free oat flour system at its Lodi facility. As a result, the products may contain an undeclared allergen – wheat – in products labeled as gluten-free.

General Mills will recall and retrieve affected cereals produced on those dates from customer warehouses and store shelves. Consumers with wheat allergies, celiac disease or gluten intolerance should not consume products bearing the affected code dates and should contact General Mills for a replacement or full refund.

This voluntary recall includes four days production of original (yellow box) Cheerios, and thirteen days of production of Honey Nut Cheerios at its Lodi, California facility with the following “BETTER IF USED BY” code dates and the plant code LD which indicates the product was produced at Lodi, California:

One thought on “Gluten-Free Cheerios Recalled”