George Chookazian starts his days much like he did when he was a kid, before the sun is up. Now, Chookazian’s early wake up is necessary in his dual role as a baker and entrepreneur.

Chookazian co-owns Foods by George with his wife Ceil, who has celiac disease. Every weekday, he oversees the baking and distribution of their line of gluten-free products at the company’s dedicated craft bake house in Mahwah, N.J.

Once the baking begins, so does the fun. Chookazian gets to smell and taste everything from cinnamon currant English muffins to brownies, pound cake, pizza and more.

The story behind Foods by George is one of love and necessity. When George and Ceil began dating in 1989, he was working in finance, and cooking was a hobby. As their relationship grew, he began to share his passion for cooking with Ceil. The problem was the more they ate, the sicker she got.

Then Ceil was diagnosed with celiac disease, and Chookazian started on a mission to make delicious gluten-free foods. He opened Foods by George in 1991 and trained at the Culinary Institute of America’s Baking and Pastry Arts program to hone his skills.

In the middle of a recent busy workday, Chookazian shared what his typical day is like. He reflected on the gluten-free community, noting that he never imagined it would grow as much as it has.

What time do you wake up? 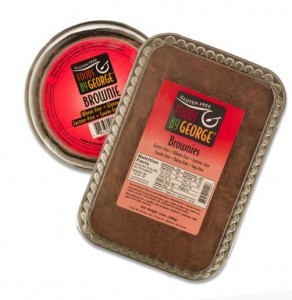 During the week, it’s really quick. I just have a bowl of cereal and a cup of coffee. We are always popping good stuff out of the oven [at work], so I’m always going to eat something later. On any given day, we have two to three types of English muffins, blueberry muffins and brownies.

What time do you get to work?

Usually by 7 a.m. I’m in the office ordering ingredients, talking with suppliers, brokers, distributors, working out promotions, setting up appointments and meetings and overseeing production. I probably get at least 200 to 300 emails a day. We are a regional company, and our products are available in supermarkets and health food stores in the Northeast, Midwest and Southeast.

We just picked up a new chain in Texas, our first entry there, and they are taking English muffins.

I’m always creating new items. So, I try to spend some time each week tinkering. If I have something in particular I’m working on, I might be working on it every day. I usually leave work by 4 p.m.

Is there one product you’re especially involved with during production?

The things that really charge me up are English muffins. I always loved yeast raised items. To me, that’s a work of art because you are dealing with yeast, which is a microorganism, and it has a life of its own. You talk to any good artisan bread baker, and it’s the simple fact of time and temperature. You are taking ingredients and you are mixing thing ups, and when you are dealing with yeast, the end product is completely different than all those ingredients before yeast was added.

Do you taste test throughout the day?

Everything and I’m suffering from that. I do it because I like it and, of course, I want to make sure everything is as I want it to be, both in looks and texture.

I will throw our pizzas into the oven quite often because our crew loves them. I always bring in leftovers like roasted vegetables, grilled chicken and salad.

Is there anything surprising about your day?

It’s possible that people might not see that I’m so involved in the day-to-day running of the company. The one thing I always enjoyed and that means a lot to me is the relationships with my ingredient and packaging vendors. It’s part of what I enjoy doing. They are always there to help me out.

What’s your favorite part of the day?

On the personal side, when I see racks of English muffins coming out of the oven. The smell is just absolutely phenomenal, particularly the cinnamon currant. You get the smell of sugar and cinnamon wafting through the bakery. Anytime a product comes out of the oven, there is nothing better going on around here. I will admit from the business side, I do like seeing palettes of product going onto distributor’s trucks.

I can work a 12-hour day and go home and cook for an hour and a half. It’s always been a creative outlet for me. I love to grill so I will do pork, chicken, fish. I do a lot of rotisserie items. I roast a lot of vegetables. On a Sunday, I’ll spend hours cooking for the week. This summer was amazing with vegetables. We had a cucumber and tomato salad almost every day. We don’t do pasta that much. I’ll cook mostly rice, risotto and quinoa.

What’s it like to have been part of the gluten-community for 23 years?

I never imagined it to grow to the extent that it’s grown. When I started out doing this, the diagnosis rate was 1 in 5,000. Then it was in 1 in 3,000. Then it was 1 in 1,000. Now, we are at 1 in 133. I go back and give credit to the early pioneers: the support groups, the doctors and the individuals who worked so hard. We are all benefiting from them.

It’s been remarkable to see the interest created by both companies and individuals. I remember even 5 years ago, some of the retailers I contacted didn’t want to have anything to do with gluten free. Now, every single one of them has at least three freezer doors of gluten-free foods and non-frozen shelf space. There really are so many good products. It’s so much easier for families now.

How has Foods by George changed you?

What does baking for the gluten-community mean to you?

I love it. A psychologist might say I have a deep need to be wanted. It’s a tremendous feeling, particularly when there are so many companies out there. When people are still interested in our product, it’s so rewarding and thrilling.

Guest blogger Susan Cohen is a freelance writer who often contributes to Gluten-Free Living. This is the 7th in her Day in the Life series.

(This interview has been edited for length and clarity.)