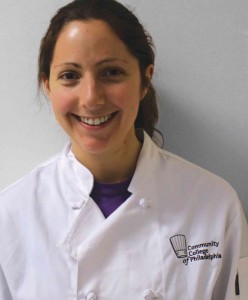 Chef Laura Hahn has been contributing recipes to Gluten-Free Living since 2013. She’s the brains behind delicious gluten-free dishes like Chicken Mole, Strawberry Salad and our In-Side Out Burger. She’s also a winner of NBC’s Next Local TV Chef contest in Philadelphia. But Hahn hasn’t always spent her time in the kitchen creating fabulous gluten-free food—originally Hahn was studying to be a doctor. Here’s her story, originally published in our July/August 2013 issue:

I grew up dreaming of being a doctor and graduated from the University of Scranton with a pre-med degree. Then I worked for the Red Cross, including a six-month deployment in Iraq. While deployed, I got very sick and doctors advised me to eat a bland diet including pastas, bread and crackers. By the time I returned to the United States I was getting daily transfusions of iron.

I continued to see doctors and had many tests, but I was not getting any better so I started to keep a food diary, noting my symptoms. One of the things I noticed was that I would get sick after drinking beer but not wine. I did some research and learned about the symptoms of gluten sensitivity. That lead me to try a gluten-free diet, and within a week I started to feel much better.

Next I started to cook a lot of my own meals, re-creating the dishes I loved minus the gluten. I was also influenced by my travels and worked on dishes I had enjoyed in many parts of the world.
Impressed with my cooking, my boyfriend entered me in a Philadelphia television station’s Next Local TV Chef contest. Despite my lack of formal training and relatively limited experience, I was chosen to compete. Over five weeks of competition I started to build a following.

The recipes I prepared were always inherently gluten free, but they were getting positive attention from the judges because of the way they tasted. I was a winner and it changed my life.

My blog, GuiltFreeFoodieCutie.com, quickly became popular worldwide. I was asked to review and write about food, work in restaurant kitchens, and consult about gluten-free products and cross-contamination issues. Currently, I give gluten-free food tours of Philadelphia’s Italian Market. I also cook at Philadelphia events and teach classes.

Now my goal is to spread awareness of gluten intolerance and celiac disease. I can’t think of a better way to do that than by creating recipes that are prize winners and happen to be gluten free.

Want to try some of Hahn’s recipes for yourself?

Here are some of the dishes from a summery Asian-inspired menu she created for Gluten-Free Living: