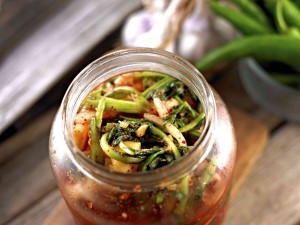 The FDA announcement contains details of what the proposed ruling would entail:

The proposed rule, when finalized, would require these manufacturers to make and keep records demonstrating assurance that:

The ruling would affect foods such as saurkraut, kimchi, vinegar, pickles and olives.

The FDA also confirms that all hydrolyzed, distilled or fermented products would be required to follow the same standards as other products if they want to label their product “gluten free”:

Hydrolyzed, fermented, or distilled foods voluntarily bearing the “gluten-free” claim will also still have to meet the requirements of the gluten-free food labeling final rule, including the definition of “gluten-free,” which means that they are either inherently gluten-free or they do not include any of the following:

In either case, any unavoidable presence of gluten must be less than 20 ppm.

The original gluten-free labeling law, released in 2013, acknowledged that it was difficult to scientifically detect gluten in fermented and hydrolyzed foods. The original rule stated the FDA would release a proposed ruling on this issue in the future.

The public can comment on the proposed ruling for 90 days. To comment on the ruling, go to www.regulations.gov/ and type in FDA-2014-N-1021 in the search box.

To learn more about the proposed ruling, see the FDA’s FAQ here.