Author Diane Sanfilippo on her history with the Paleo diet, its positive impact on her health and the second edition of her book, Practical Paleo

Diane Sanfilippo, New York Times-bestselling author of Practical Paleo and The 21-Day Sugar Detox, did not start out with a passion for nutrition. In fact, it wasn’t until college, after gaining significant weight when she stopped playing sports, that she realized she needed to change the way she approached food. And it did not take long for Sanfilippo to comprehend the difference between dieting and eating better. 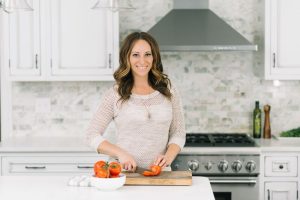 “I lost the weight eating a low-fat diet, but I didn’t get any healthier,” says Sanfilippo. “Sure, I was in smaller clothes, but still suffered with IBS, chronic sinus infections, new cavities at almost every dental checkup and a glasses/contacts prescription that was getting stronger and stronger year after year. It wasn’t until I discovered a real food approach in Paleo that I was able to turn my common-but-not-normal health issues around through improving my diet.”

In 2010 Sanfilippo—at that point working out regularly at CrossFit and studying holistic nutrition—was invited to attend her first Paleo seminar. It was there that she had her “A-ha!” moment: she had finally found an approach to eating that made sense for turning her health around.

“The two greatest ben­efits to eating Paleo are well-regulated/balanced blood sugar and improved digestive function,” Sanfilippo explains. “When we remove refined, nutrient-poor foods from our diet and include more quality proteins and healthy fats, our blood sugar levels naturally begin to regulate.”

The Paleo diet focuses on avoiding modern processed foods as well as foods that humans began eating after the advent of modern agriculture, including certain grains, poor-quality dairy products, beans, legumes and artificial sweeteners. However, many critics have cited these wide-ranging restrictions as a major reason for the diet not being sustainable. Sanfilippo, on the other hand, finds that with a bit of creativity and some simple ingredient swapping, the Paleo diet can be made to fit anyone’s lifestyle.

“I don’t personally find recipe creation while eating Paleo to be restrictive, but it certainly can feel that way if you’re used to cooking a lot with non-Paleo ingredients,” Sanfilippo says. “It’s pretty easy to make lots of swaps for old favorites, like coconut aminos instead of soy sauce or almond flour instead of wheat flour.”

Her second edition of Practical Paleo contains 40 new recipes and focuses on ingredients that Sanfilippo feels people use most while cooking, such as ground meats and chicken breast. She also added more egg-free breakfast ideas, smoothies and slow cooker–friendly meals. The recipes now feature color-coded
allergen icons along with the notes on swaps for common allergens such as eggs, nuts and nightshade vegetables.

“The second edition of Practical Paleo is my way of giving the community my best,” Sanfilippo says. “After four years and over half a million printed copies sold, I needed to be sure that the book people are sharing with their most cherished friends and family members is still as relevant and up to date as it originally was, and that it is something they can be as proud to share now as they were the original.”