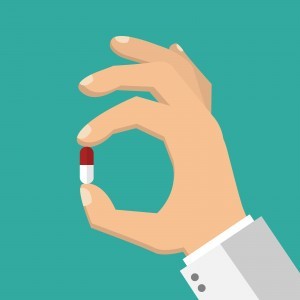 While the gluten-free diet effectively reduces and even eliminates symptoms of celiac disease, many people still experience distress. To that end, a number of drugs aimed at treating celiac disease are in various stages of development. But it is not known when the U.S. Food and Drug Administration (FDA) will approve them for market. Three products are furthest along in the process.

Taken orally, larazotide acetate drug works in the gut to decrease the permeability of the intestine, one manner in which gluten causes symptoms. The medicine is not meant to allow those with celiac disease to eat gluten-containing foods. Instead, it works with the gluten-free diet to prevent “leaky gut” syndrome in cases of incidental cross-contamination.

The compound has consistently reduced symptoms in multiple clinical trials in more than 800 patients with celiac disease. It will begin testing in a large Phase 3 clinical trial in late 2016. This is the first celiac disease drug to get this far in the approval process.

Formerly ALV003, this oral drug combines two protein enzymes that degrade gluten. Patients who were given this medication and then a gluten challenge showed no significant signs of intestinal mucosal injury.

Already through Phase I and Phase 2, it is the only treatment that has shown both histologic success and improvement of symptoms in clinical trials. Biopharmaceutical company ImmunogenX, which acquired IMGX-003 in March 2016, plans to take it through late-phase clinical trials.

This injectable vaccine-like product changes the body’s immune response to gluten. According to ImmunosanT, the company behind Nexvax2, it is the only celiac disease treatment in clinical development today that has the potential to empower patients to return to “a normal diet, good health and improved quality of life.” After positive results in Phase I clinical trials, the next step will be Phase 2 testing, in which it will be given to larger group of people and further evaluated for safety and effectiveness.

Some experts feel taking a combination of products may be the best protection against symptoms and damage caused by exposure to gluten, but that will be evaluated once the products enter the market.