Naturally gluten free (always read ingredient labels to verify) and an excellent source of nutrients, sea vegetables are aquatic species of algae that have been popularized throughout East Asian cuisines.

These vegetables are often incorporated in Japanese, Korean and Chinese meals, providing essential nutrients, such as vitamins A, C and E, B vitamins, folate, calcium, iron, protein (particularly in sea lettuce) and more. They are a great alternative source of healthy complex carbohydrates. Sea vegetables can be utilized for a variety of meal options and are often paired with dishes that include seafood. Some of the most popular sea vegetables include nori, kombu, sea grapes, sea lettuce and wakame. Use these sea vegetables to make delicious homemade sushi, hand rolls, wraps and salads. Here is a comprehensive look at these sea vegetables and their health benefits.

Nori is a species of red algae, commonly used in Japanese cuisine. Most people recognize nori as the seaweed wrapping around their favorite sushi rolls.

Nori is one of the healthiest seaweeds, providing the highest source of protein, approximately 50 grams per 100-gram serving.

Researchers from Stanford Medicine found that gut bacteria responded positively when nori was introduced into the diets of mice. Gut bacteria can provide essential nutrients and promote healthy digestion. The lead author of the study, Elizabeth Shepherd, PhD, believes microbes “are a very powerful lever to modulate our biology in health and disease,” and nori can add help incorporate an additional strain of healthy gut bacteria into your digestive system. Researchers from the American Chemical Society reviewed over 100 scientific studies and found that nori seaweed contains proteins similar to bioactive peptides, a protein chain found in milk products and various other animal-based products, which can reduce blood pressure and even prevent certain diseases. In addition, nori provides an excellent source of omega-3 fatty acids and vitamin B-12.

Kombu is another edible sea vegetable that is popular in East Asia and is often found in noodle dishes or broths.

Researchers at the University of California, Berkeley, found that brown seaweeds, such as kombu and wakame kelp, could have a significant effect on breast cancer in humans.

The study focused on an American seaweed variety called bladderwrack, which is closely related to the Japanese kombu and wakame kelp. These seaweeds contain properties that had an effect on the sex hormone estradiol. Estradiol is a potent hormone that can increase the risk of developing a variety of diseases, including breast cancer. This study suggests that brown seaweeds like kombu can lower the level of estradiol found in the body, effectively lowering the chances of estrogen-dependent diseases from arising. In a press release, Professor Martyn Smith of UC Berkeley stated, “Kelp is a little-studied nutrient, but there’s good reason to look at it more closely…this study opens up a new avenue for research leading to cancer-preventive agents.” While kombu and other seaweeds and kelps offer wonderful nutritional benefits, it is important not to over-consume seaweed, as it is often high in iodine.

Similar to the kombu seaweed, wakame kelp is another variety of brown algae that is commonly consumed in Japan. It has a distinctively strong flavor and is often incorporated into soups, broths and salads. Most people are familiar with wakame kelp as it is often used in miso soup, a Japanese dish found in virtually every sushi or Japanese cuisine restaurant.

Wakame can also aid in lowering the chances of developing sex-hormone related disease, as well as fighting off obesity.

A study published by the American Chemical Society found that brown seaweed and kelp, like wakame, contain a compound that promotes weight loss. The compound fucoxanthin successfully promoted weight loss by reducing the accumulation of abdominal fat in obese rats and mice. Fucoxanthin produces a brown pigment, which gives the species of brown algae its name, and is only found in large quantities in species of brown algae. It is believed that the compound interacts with the protein UCP1 to stimulate fat oxidation, which, to put it simply, is the conversion of energy to heat. Essentially, the proteins found within wakame promote the burning of fat cells, especially abdominal fat. Fucoxanthin also causes the liver to produce DHA, a compound similar to omega-3 fatty acids, which can reduce low-density lipoproteins (LDL), also known as “bad cholesterol.”

Sea lettuce is a popular edible green algae that is commonly used in salads as an alternative to lettuce. Sea lettuce can be found along most coastal regions throughout the world, lending to a wide variety of recipes and dishes that it can be incorporated into.

American researchers recently discovered that varieties of edible algae like sea lettuce contain polysaccharides that can aid in lowering the effects of allergy symptoms and asthma.

Researchers also noted that the molecule gracilaria lemaneiformis, common in seaweed and edible algae, had similar anti-allergen properties, with the ability to reduce tropomyosin, a protein found in shellfish that can result in an allergic reaction. Moreover, a 2015 study published by the Institute of Food Technologists found that edible algae is a wonderful alternative protein source. For individuals interested in reducing their animal protein consumption, sea lettuce can provide the essential requirements for a healthy and reasonable protein intake. One serving of edible algae consists of 63 percent protein and 15 percent fiber. Algae protein can be found in protein shakes or smoothie mixes and protein bars.

Just like sea lettuce, Okinawan seaweed, or, as it’s commonly known, “sea grape,” is another variety of green algae found in coastal regions of the Indo-Pacific. Sea grapes, a beloved snack in Japan, can be consumed on their own or with rice dishes or sushi.

Sea grapes are another type of green seaweed that can provide essential nutrients, including omega-3 fatty acids and vitamins A, C, E and K, as well as promote docosahexaenoic acid, which supports brain functioning.

Researchers from the University of Kansas found that docosahexaenoic acid (DHA), when taken by pregnant women as a supplement, resulted in a greater percentage of fat-free body mass in children by the age of 5. The study suggests that DHA can greatly influence body composition in the early stages of childhood, lowering the possibility of childhood obesity. As well, research conducted at the University of Illinois at Chicago found that DHA can affect the development of Alzheimer’s disease and depression significantly. The study argued that the omega-3 fatty acids found in DHA provided anti-inflammatory properties that could help protect the brain against neurological diseases. Plus, the study found that consuming DHA-rich foods like fish and sea vegetables could greatly reduce the risk of developing depression or memory loss. Dr. Papasani Subbaiah, an author of the study, suggests, “This study is proof of the concept that we can increase levels of both EPA and DHA in the brain via supplements or by incorporating LPC-EPA in the diet.” Consuming a single serving of DHA-rich food like sea grapes can help to improve cognitive functions. 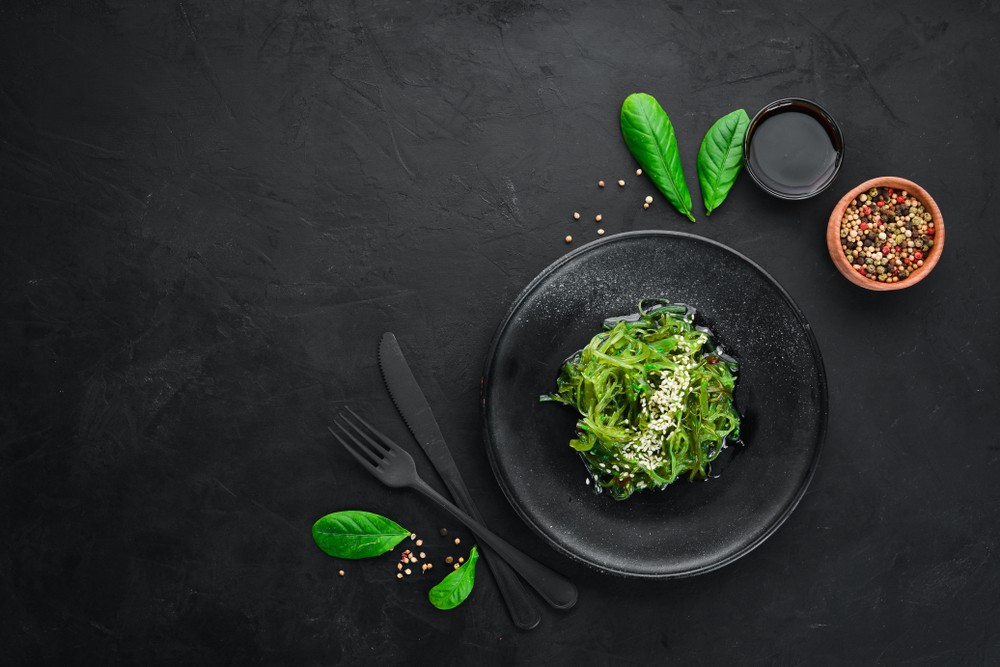 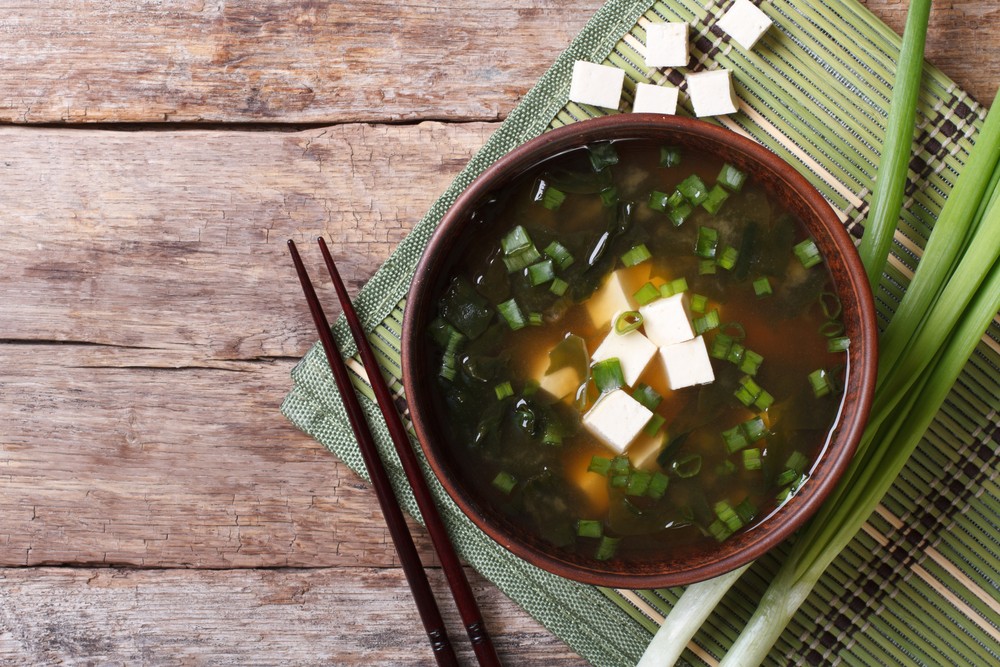 Miso Soup is a Japanese dish found in virtually every sushi or Japanese cuisine restaurant that uses wakame kelp. Our Miso Soup recipe is quick and easy. 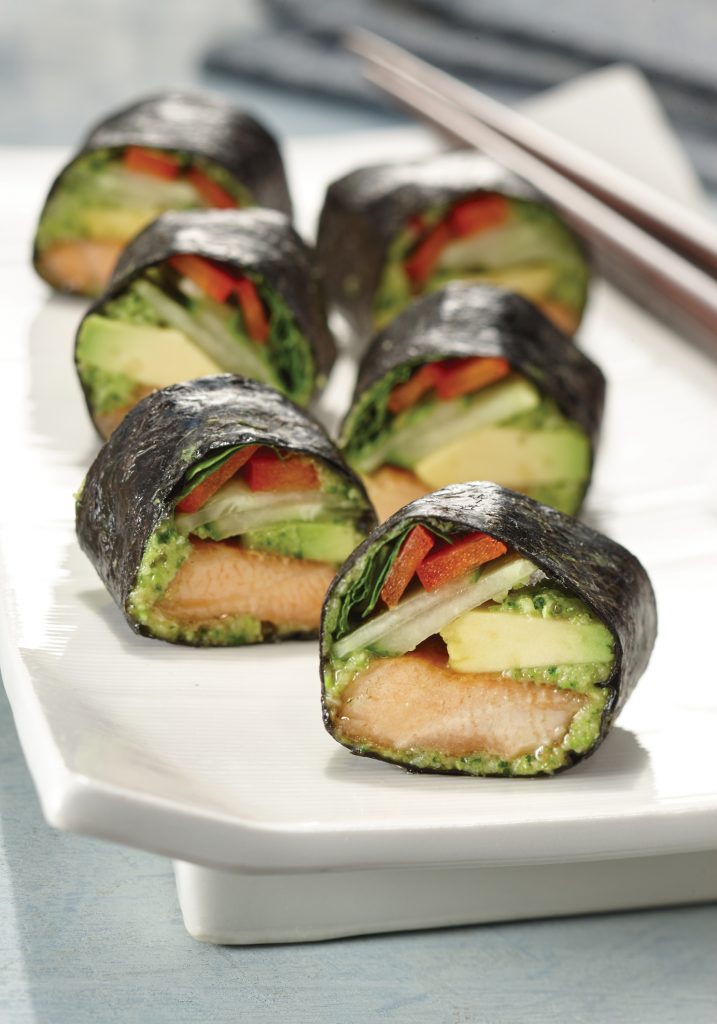 Nori is a species of red algae, commonly used in Japanese cuisine.Most people recognize nori as the seaweed wrapping around their favorite sushi rolls. 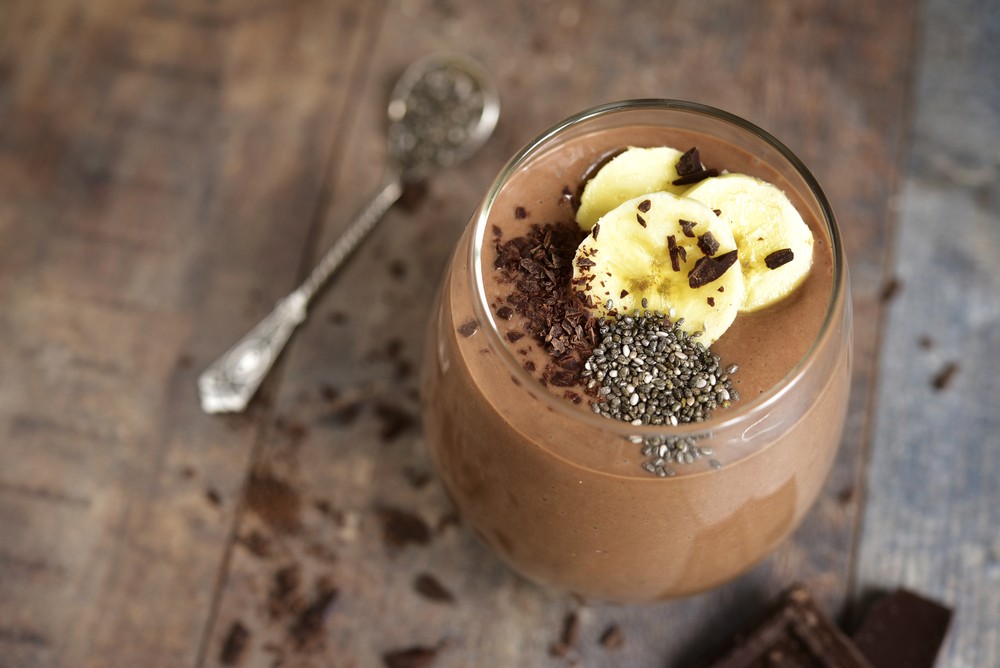