Craving some comfort food during these cold winter’s nights? Use our resident gluten-free baking expert’s tips to create a tender and flaky crust for a cozy gluten-free pot pie. 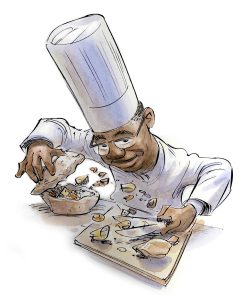 There’s not much better than a hot pot pie on a frigid winter day. Sure, you can probably purchase one already made, but premade pot pies often fall short in two areas. First, they are designed to be microwaved for faster cooking. I still prefer to bake pot pies in a conventional oven. Second, some premade pot pie makers skip the bottom crust, only using a top crust. But the more crust the better, I say! And so, here are my keys to producing a gluten-free pot pie that’ll give you another reason to stay inside.

You will need three elements to make your pot pie: gluten-free pie dough, a flavorful stock or broth, and a hearty filling, which requires a gluten-free roux as a thickener.

I covered gluten-free pie dough in the past. Making your own is a terrific accomplishment, but purchasing a premade dough is OK. The main concern with premade dough is that it has been mixed ahead of time and then allowed to “age” in the fridge.

I don’t bother using a solid fat in a gluten-free pie dough because it can interfere with the binding properties. Rather, I melt unsalted butter or lard, then add it in with the liquid. Or I use an oil such as canola.

Stock it to me

I fancy a hearty stew for my pot pies. Always start with a flavorful, thick—naturally, from the bones—stock. Sure, making one from scratch is time well spent. But, if pressed for time, purchase a high-quality, low-sodium broth to make the stew.

Sauté the vegetables in butter or oil until onions are translucent, then singer (dust) the cooked veggies with gluten-free flour (preferably one with some protein content, not one that is all starch). This classic technique allows the vegetables to begin the cooking process and naturally develop into a roux together. It also cooks out the starchiness within the roux. Gradually add in your boiling hot stock or broth. Bring back to a second boil to fully activate the roux. Remove from the heat and cool properly, in a shallow pan.

Fold in large chunks of whichever protein you choose, whether roasted chicken or medium-cooked beef (boneless cuts, with some traces of fat). Now, season the stew, but don’t over salt. This mixture should be very thick and full of vegetable and protein chunks.

Now, split the pie dough you’ve already made in two. Place the first half in a pie plate or shallow casserole dish, pressing into the bottom and up the sides. Next, pour your stew into the crust. Top with the rest of the dough. Brush the top crust with some egg wash. Leave a vent hole or cut slits into the top crust to allow steam to escape during baking.

If your filling or stew is super-thick, consider making individual hand pies. The top and bottom crusts are more prone to browning, but it’ll help improve the hand pie’s external structure. If the filling is a bit too loose, fold in some flavored cooked rice or potatoes cooked until just before fork tender.