Not since 2013’s Thanksgivukkah, when Hanukkah overlapped with Thanksgiving, have American Jews been so excited for the holiday season.

Hanukkah usually happens sometime in December. The eight crazy nights typically pass before Santa descends the chimney. Since the Jewish calendar is lunisolar—meaning it is based on moon phases and the solar year—the Jewish holidays move around relative to the Gregorian calendar. Every so often, the Jewish holidays overlap other holidays, but it is uncommon for Hanukkah to extend past Dec. 31.

This year, the calendar-collide results in a very rare phenomenon: Jews will light the first Hanukkah candle on Christmas Eve and the last on New Year’s Eve. That’s right, we get to share the holiday and triple-celebrate—and, boy, do I plan on celebrating! Merry Jew Year’s Eve-ukkah, indeed.

And with the extra-special occasion comes fun and ridiculous holiday mash-up products. This year’s offerings on my website, ModernTribe.com, where we feature fun Jewish gifts from all over the world, include Jewdolph bottle koozies, Chrismukkah cookie cutters and Merry Jew Year’s Eve-ukkah-themed partyware.

So join me in donning a Jingle, Sizzle, Pop apron, frying up some Jew Year’s Day Lucky Latkes—and have yourself a merry little Jew Year’s Eve-ukkah! 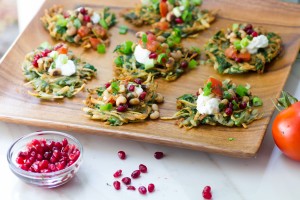 Amy Kritzer is the Founder of WhatJewWannaEat.com, President of
ModernTribe.com and author of the cookbook Sweet Noshings. In her
spare time, she enjoys theme parties and glitter.