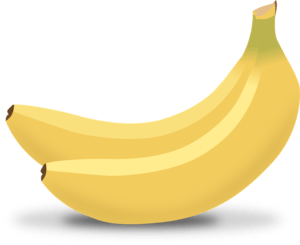 I first learned about banana babies in the early 2000s. The term refers to very sick children who were diagnosed with celiac disease, placed on diets heavy in bananas and told they would outgrow celiac. Years later, many found themselves not feeling well because —as the medical community would later come to understand—celiac cannot be outgrown.

I know more than one banana baby personally, including Ceil Chookazian, who owns Foods by George with her husband George. Chookazian was actually one of the very first people I had the privilege of meeting within the community after my celiac diagnosis in 2000. Perhaps that is why I have always felt so strongly about banana babies and their unique, complicated history with celiac and the gluten-free diet.

I recently realized that I don’t even remember the last time I had a conversation about banana babies. With May being Celiac Awareness Month, I wanted to do something to get the term out there again.

“This banana diet really was developed in the [1930s] and ‘40s, when these kids that were brought to the hospital were dying,” explains Alessio Fasano, MD, Director of the Center for Celiac Research and Treatment at Massachusetts General Hospital. “So the idea was because [the children] are having diarrhea—because that was the main manifestation of celiac disease at that time—and because they knew that with diarrhea you lose some minerals, in particular potassium, empirically they decide for bananas. Why? Because they’re filled with astringent, so in other words they make you constipated, so they try to counterbalance the diarrhea and…because they are rich in potassium. So that’s the reason why they decided to focus on bananas and they give you enough calories to stay afloat. And of course, eating bananas and nothing else, you are gluten free. And you know—surprise, surprise—these kids were surviving on that diet.”

Fasano, a renowned expert on all things celiac, covers its history in his book Gluten Freedom: The Nation’s Leading Expert Offers the Essential Guide to a Healthy, Gluten-Free Lifestyle, including how the banana diet was developed and a first-person banana baby account.

As Fasano notes in the book, the major breakthrough with celiac disease was made by Dutch pediatrician Willem-Karel Dicke following World War II. He writes, “In the decades before Dr. Dicke’s discoveries, many children thought to have celiac disease were fed bananas almost exclusively for three to six months. A pediatrician from New York City named Sidney Haas developed the diet in the 1920s. It remained the guiding therapy until 1950, when Dr. Dicke published his thesis with a meticulous dietary study that documented gluten as the dietary trigger of celiac disease.”

At the time, the understanding was that celiac disease could be outgrown. “What they did at that time was, after four to five months they were on this diet, they gradually introduced everything else,” says Fasano. For some of the children, the outcome was horrible. “A good chunk of kids relapsed and they died,” he explains. In other cases, the results were different. “A group eventually did not relapse or relapsed with much milder symptoms, and they survived.”

The banana diet continued into the 1950s and ‘60s. “The reason why it was still used in the ‘50s is because the gluten-free diet was not popular yet,” explains Fasano. There was a gap in disseminating information about celiac and the gluten-free diet. “Dicke’s work was not really…streamlined, and in the meantime the success of the banana diet really took over and was extremely popular[ly] implemented. By the time that Dicke’s work became more clear and then subsequent work found out there was gluten in wheat that was the culprit, then at that point the gluten-free diet started to gain popularity.”

Chookazian and her younger sister were both placed on the banana diet in 1960, toward the end of the diet’s popularity. Chookazian was three years old and her sister around 18 months old when they became symptomatic. “We exhibited differently, yet we both had celiac and we both were put on the diet and we both ate a lot of bananas, bananas and [more] bananas,” says Chookazian. “It was actually called non-tropical sprue when we were little.”

She describes the differences between her symptoms and her sister’s. “I started to get sick [with] the measles, mumps, whatever; I never seemed to come out of it,” she says. Her sister, meanwhile, experienced something very different. Chookazian explains that “during that time period there was a terrible starvation period in Biafra and there was a lot of information in the news about Biafran babies that were very thin in their arms and legs with big stomachs from being malnourished—that’s how my younger sister looked. Whereas I, on the other hand, looked really big and puffy, and got bigger rather than smaller.”

Their doctor was stumped by the two sisters and their symptoms. He sought out the advice of a medical professor from Europe. “And he contacted this doctor and said, ‘I have these two little girls. I don’t know what’s the matter with them. Here are their symptoms.’ And [the professor] said it sounded to him like a thing called non-tropical sprue. And he told our doctor what to do.”

Chookazian remembers how she and her sister were admitted to the hospital. Their doctor was very honest with her parents about the severity of the situation. “So this doctor said to my mother, to my parents, ‘They’re probably both going to die. We don’t exactly know, but we think it’s this thing called non-tropical sprue and here’s the plan. You’re going to start them out on things like rice, potatoes, bananas,’ and that’s where bananas came in.”

She also remembers eating Hol Grain Brown Rice Crackers—“those same crackers they have now”—which were a staple in her diet once she started cutting back on bananas. “They were very durable. My mother would take ham and roll it up and put it in between two of those.” But by the time Chookazian was a teenager, she was eating gluten and a much wider diet.

As she got older, Chookazian began eating more and more gluten. As an adult, she would grab slices of pizza on the way home from work. By the late 1980s, unbeknownst to her, her celiac had relapsed. She had been losing weight for a prolonged period of time. She continued to get worse, particularly around the time she began to date her now husband George. “George and I started dating and then I started eating a lot of bread. That just exacerbated everything,” she says. “In a very short time, a two- to three-week period, I went from 123 pounds or so down to about 92 pounds.”

All the while she had been seeing her internist, who diagnosed her with irritable bowel syndrome. He did not make the connection with celiac. In fact, “I had told him I had celiac disease when I was a kid,” to which the doctor replied, “No, no, no, you outgrew that. That’s not it.”

Eventually Chookazian became so sick that she was hospitalized in 1990. “I was in the hospital just wasting away.” Finally, “a doctor named Zvi Fischer over in Ridgewood, New Jersey, at Valley Hospital, got on the case.” It did not take long for Fisher to determine the cause of Chookazian’s symptoms. “He took a look at my stuff, my history, and he said, ‘Oh, you have celiac disease.’ I said, ‘I outgrew that’ and his eyes sort of crossed and he said, ‘No you didn’t. You never outgrow celiac disease.’  He said, ‘you’ve got a full-blown case of celiac disease.’”

In Fasano’s own practice, he has encountered banana babies “many times, some with very sad stories. The vast majority of these people remembered that they were diagnosed with celiac disease or were told by their family, the parents, they were diagnosed as celiac during the early days, and that was completely forgotten and then they start to again have symptoms and now that celiac disease and gluten are so popular, they check it out—‘what could be wrong with me?’—and find out that the celiac disease can be one [cause], and then they put two and two together.”

When asked whether there are individuals who were placed on the banana diet but are unaware that they never outgrew celiac disease, Fasano notes there are, but the exact numbers are indeterminate.

Chookazian, for her part, welcomed confirmation that she never outgrew celiac and was relieved to learn the cause behind her symptoms. “That was probably one of the best days of my life,” she says. “It was a relief for me because I was so sick. I felt very fortunate. I thought to myself, ‘I know how to do this.’ Certainly my greatest blessing was George. Not a thing that I wanted that he didn’t make for me.”