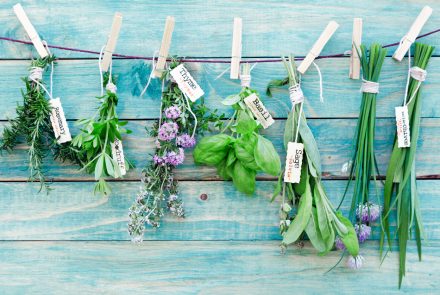 Summertime heat brings the desire for salads, fresh fruits and vegetables – lighter meals that satisfy but don’t weigh you down. Garden-fresh herbs such as chives, parsley, basil, dill and coriander are easy to grow and they can really dress up a dish. Use them chopped, snipped or torn to enhance the flavor of your favorite foods.

The best thing about herbs? They add taste without adding gluten. Meals that taste good tend to be more satisfying, so cooking with herbs may help with food cravings long after mealtime is over. Health benefits of fresh herbs are hard to overlook. We’re talking about large amounts of vitamins A, C and K, as well as polyphenol plant compounds with antioxidant and anti-inflammatory protection. For people who follow special dietary plans, such as a gluten-free diet, herbs turn everyday flavors into fireworks for the taste buds.

Gluten is not present in natural herbs taken directly from a plant. Major herb manufacturers, such as McCormick, also have issued advisories that their herbs are processed on dedicated manufacturing lines that do not ever process foods that do contain gluten.

Do check the label on spice blends, however. Some manufacturers include flour or other gluten-containing fillers in their mixes. If they do so, it must be listed on the label.

Two of the most popular kinds are sweet (Italian) basil and Thai purple basil. Both are floral-like with a sweet taste of pepper. Use basil on Asian and Indian foods to balance out overly spicy dishes. Whether you grow your own or buy some from a marketplace, you’ll want to remove and discard the stems. The leaves hold most of the flavor. Add this herb at the end of the cooking process. Among the many foods it spices up, basil tastes great with grilled chicken, chicken parmesan, tomatoes and mozzarella cheese.

Three grams of minced chives have only one calorie but contain vitamins A, C and K. Along with egg and cheese dishes, chives add that oniony flavor to creamy vegetable dips, stews, sour cream, potatoes, soups and salads. Sprinkle chives on butter or margarine for a tangier taste; the flavor is not as harsh as a scallion, but it still brings the bite!  Cooking them dulls the flavor, so add chives as the final ingredient to your recipe. Chop, mince or thinly slice this herb.

What’s important here is how you use these herbs. Cilantro has a citrusy, tangy flavor often used to spice up in Mexican dishes. Coriander has a touch of citrus flavor but is spicy and nut-like, and blends well with cinnamon and cumin. The peppery taste adds a kick to marinade, soup, curry, chili and spice rubs, as well as bell peppers, potatoes, tomatoes and onions.

Coriander is also used as a medicine to help with digestive problems like upset stomach and nausea.

You’ve tasted it on pickles and potato salad, but fresh or dried dill is good in cold soups, yogurts and cucumber sauces (such as tzatziki.)  It also goes wells in sour cream, salad dressing, seafood and lamb. Fresh and dried dill is available in the produce section of the grocery store, or you can grow it yourself in pots and gardens.

Parsley has a song to it that brings the flavors out in summer salads, soups, quiches, pasta, eggs and just about everything else. Try it in pesto or sprinkle it in soups and tomato sauce. Try blending chopped parsley, lemon zest and garlic for a rub on fish, lamb, beef or chicken. Add parsley leaves to lettuce, purple cabbage, red tomatoes, yellow and orange peppers … it’s a salad rainbow!

Thyme is a ground cover plant that is both flavorful and rich in vitamins like C, D and B.  One of the best uses for Thyme is as an aromatic when cooking a steak. Start by searing a steak for a minute on each side (be sure the pan is hot).  Then add butter and a couple of sprigs of thyme to the pan, and use a spoon to baste the steak as it cooks.  The flavor of the thyme is perfectly complementary to the beef without overpowering it’s the natural flavor.  Thyme is very versatile and can almost always be used to flavor seafood, chicken or vegetables.