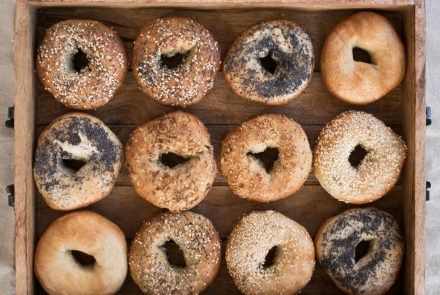 George Chookazian knows a lot about baking gluten-free bread. For almost 30 years, the founder and owner of Foods by George has been baking gluten-free English muffins alongside products including blueberry muffins, brownies and pound cake. In those three decades, Chookazian has had time to reflect on the bread-making process.

“There’s a romance to making bread,” he said. “Of all the products I have ever made, I absolutely love making English muffins.”

In 2019, the gluten-free community is starting to see what is truly possible with gluten-free bread in the bakery and bread aisle. There are more options at the supermarket, more gluten-free bakeries and even more opportunities to enjoy gluten-free bagels. So much development merits a roundup of some of the innovation.

A taste of France

In Oakland, California, a taste of France is possible thanks to Mariposa Baking Co. The bakery, founded by Patti Furey Crane, bakes croissants, a complex product to make gluten free. The question arises, what does it take to create a croissant without gluten? The answer, as she explained, is that they have to use the same exact technique as anyone making a croissant.

Lamination is the process by which the croissant comes to fruition. The purpose is that “you’re building up your dough to get flakiness—keeping butter separate from flour.” This is accomplished by “doing folds of dough with this sheet of butter.” What happens is that “you’re breaking the butter down into the dough…you want the butter to be in the dough in a cold form so that creates a separation” between the flour and butter.

As Crane explained, the baker will “laminate the dough in the same way” that a croissant containing gluten is made, “but we use our little flour combination,” which is where the difference exists. She noted that making croissants is labor intensive as “it’s a very handmade product” and “we don’t have any way of doing laminations, aside from doing [them] by hand.” With croissants, she said, “there is no way to cheat it or fake it.” 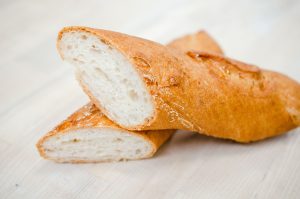 When discussing the croissants, Crane said that when it comes to baking, “everything evolves” and “maybe tomorrow it can be better, but we don’t figure it out until tomorrow.” The evolution she talks about has benefitted Mariposa’s baguette. In fact, she explained, “we evolved it last year, quite by accident.” The baguettes, which are vegan, are made “in a traditional way” using a bread molder. The evolution of the product has led to it being “less dense, a lot lighter,” with a “nice texture, nice crumb,” and this improvement can be noticed, she shared, when the produce is reheated.

When it comes to baking bread, Crane said, “It’s fun figuring things out. There’s so many things you learn by accident and observing what’s going on here.”

When it comes to purchasing gluten-free bread at the supermarket, the freezer aisle long was the most likely place to go. These days, there are more options sitting on a shelves, and this includes products from Canyon Bakehouse. What inspired the company to have shelf-stable products thanks to its stay-fresh packaging, in addition to its products in the freezer section? 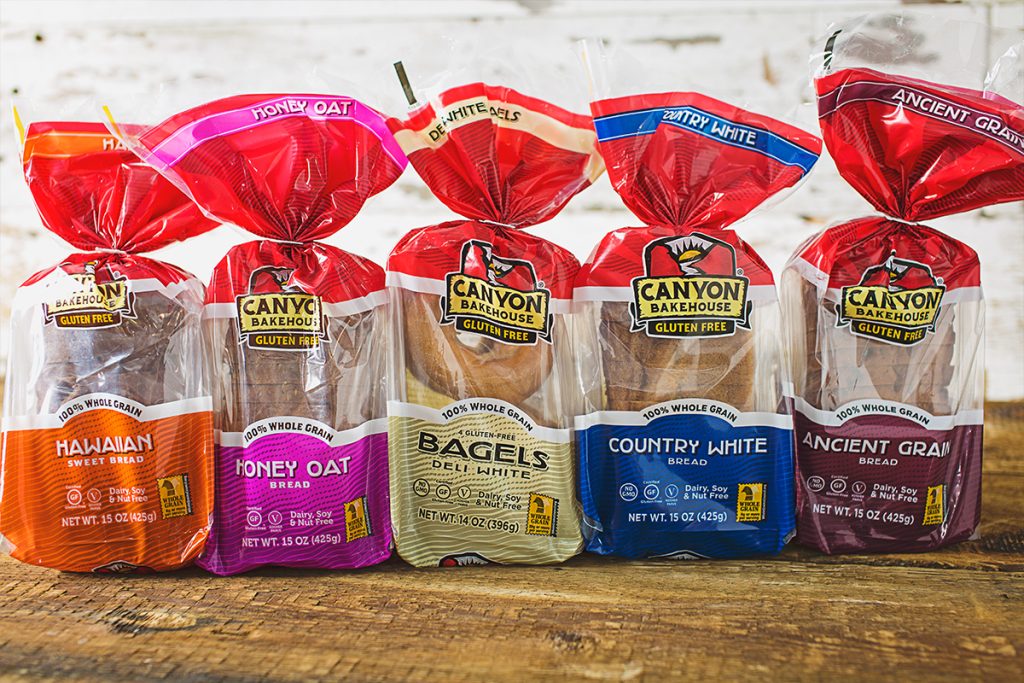 “Our stay-fresh packaging was developed to solve the shelf-life riddle for both retailers and consumers,” said Jesse Weilert, vice president of technical services at Canyon Bakehouse.

“Retailers want to be able to sell gluten-free bread in any part of the store, not just the freezer,” Weilert said. “Consumers want to be able to keep bread on their counter or in their pantry for a longer time without having to worry about wasting bread. Since grocers sell gluten-free items in different parts of the store—the freezer, in-store bakery, bread aisle—the stay-fresh packaging allows us to be in more places, specifically in the fresh bread aisle.”

Beyond just bringing bread to the bread aisle, the company thought a great deal about which products should be available with the stay-fresh packaging.

“When we launched the stay-fresh products, we wanted to create unique flavor varieties so consumers could find almost any bread type they wanted—Ancient Grain Bread, Hawaiian Sweet Bread and Deli White Bagels in the fresh bread aisle, and our classics like 7-Grain Bread, Cinnamon Raisin Bread and Everything Bagels in the freezer, for example,” Weilert said. As far as the Hawaiian Sweet Bread, Weilert noted that the product “is one of those specialty flavors that goes so well with lots of family favorites, like barbecue and holiday meals.” 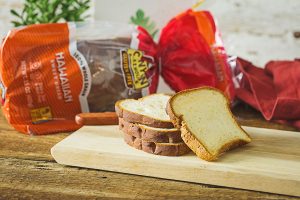 In addition to this new packaging, Canyon Bakehouse has had a number of other product innovations over the years. One of its first big innovations was a wide slice. What did it take to figure out how to make wider slices?

“Gluten-free bread doesn’t rise like wheat breads, so you can’t just add more dough to a bigger pan in order to get large slices. Gluten is the ‘glue’ that holds bread together, so it required a lot of recipe innovation and understanding how ingredients and baking techniques work together to get the right size and shape, but also the same great taste people expect from our breads,” Weilert said.

Of note, when it comes to their bread, the bakery has always taken allergens into consideration. “We have always been free from seven of the top eight food allergens. Egg is our exception,” Weilert said.

Authentic Foods offers an array of gluten-free flours for those who prefer to bake their own bread. These include almond meal, millet, white sorghum, bean, rice, potato, arrowroot and tapioca flour.

“It’s not just gluten free, it’s better!” is the Authentic Foods’ motto. Their new Steve’s GF Bread Flour Blend forms a dough without using any gums. It rises, doubles to triples in size during proofing and has the taste and texture of wheat, according to Aaron Rice, vice president of Authentic Foods. The flour can be used for baking just about anything, including pretzels, cinnamon rolls, hamburger buns, challah, English muffins, breadsticks and more.

“It’s also a healthier bread alternative because it is an excellent source of fiber,” Rice said.

Authentic Foods studied the gluten molecule and developed a replacement using plant molecules. This flour “delivers on taste and texture and workability,” Rice said. Typically, gluten-free bread forms a heavy batter rather than a dough, but Steve’s GF Bread Flour Blend forms a true dough and results in the taste and texture of wheat.

Authentic Foods works with bakeries, who use their flour to create artisan bread, to replace their usual gluten-free flour with this one. The flour is used in nearly 100 bakeries nationwide and on average, their business has grown 20% within the first six months of switching to Steve’s GF Bread Flour Blend.

Authentic Foods will be coming out with a multigrain bread flour mix in 2019 that contains gluten-free oats, quinoa, amaranth and teff for a hearty bread with lots of texture and nuttiness. Both these flour mixes are vegan.

Authenticfoods.com offers a plethora of gluten-free recipes that can be made using their flours. For more advice on baking your own gluten-free bread, visit glutenfreeliving.com, where an award-winning chef and professor of baking and pastry arts at The Culinary Institute of America provides baking tips for home chefs.

Modern Bread & Bagel is a mix between a bagel store, bakery, deli and cafe. It is the vision of Orly Gottesman, who trained at Le Cordon Bleu Culinary Arts Institute while living in Sydney, Australia, and who developed a line of bread and baking mixes, Blends by Orly, following her husband’s diagnosis with celiac disease. She has taken her baking experience one step further by offering fresh daily breads and bagels alongside pastries, spreads and a cafe menu. 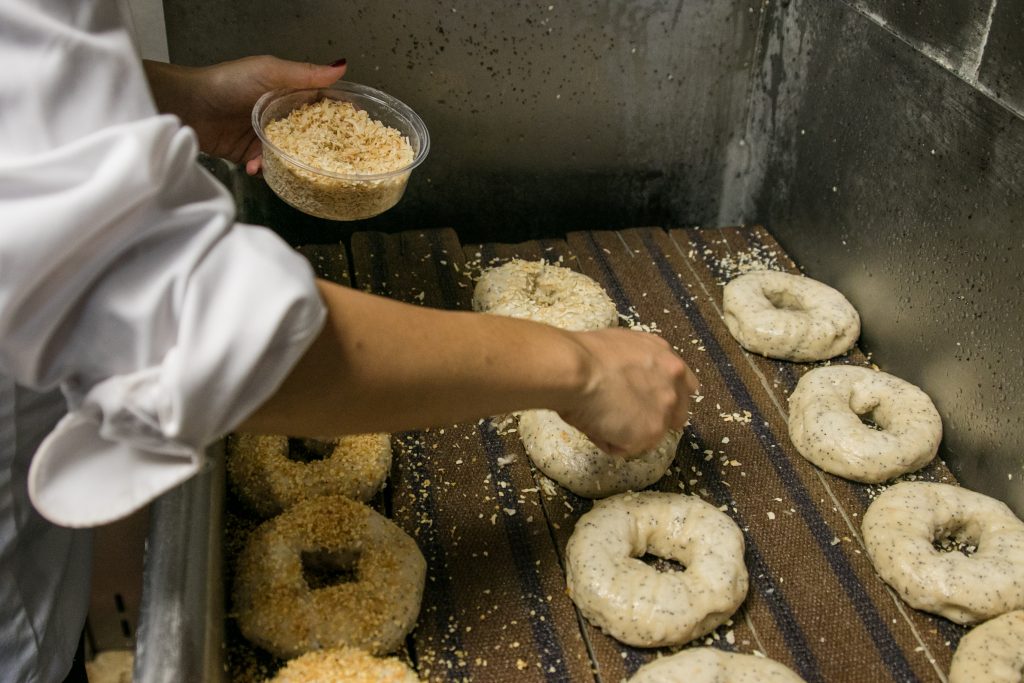 When Gottesman first developed Blends by Orly, she made an important discovery. “I realized you can’t use the same blend of flour in bread and in cookies without compromising on the taste and texture of one or the other,” Gottesman said. Thus began the process of developing different blends for different needs.

How did she go from blends to bagels? Gottesman had been living around the globe, and when she returned to New York, she and her husband walked by a former bagel store on the Upper West Side. Together, they had a “how great would it be” moment about opening a gluten-free bagel store in the location. Soon, “it really developed into a multi-concept bakery, restaurant, deli” where “everything [is] homemade, everything [is] fresh daily, so anything you see in here was made today.” 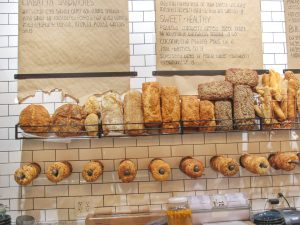 Modern Bread & Bagel uses a kettle boiler when producing its bagels. The use of this technique leads to what Gottesman described as a “crusty outside and chewy inside” bagel that is available in plain, poppy seed, sesame seed, onion, garlic, everything, superseed and cinnamon raisin. How the bagel gets topped comes down to the customer, and options range from a variety of cream cheeses to egg or tuna salad, smoked salmon and cheese. For those interested in going beyond the bagel, additional bread items on the menu include baguettes, pain de mie loaf, rustic loaf and challah on Fridays.

As far as the impact she is having, Gottesman has seen it on a daily basis. “There’s a bigger purpose” underway at Modern Bread & Bagel, she said. “First it was giving back to my husband, who is my community, and then it was growing to the greater gluten-free community.”

The thinking behind bread baking

George Chookazian first started making English muffins in a health-food store. “They were no longer using their deli operation, so I took it over, all 10 feet by 10 feet of it, and it became my first bakeshop,” said the Foods by George founder and owner.

Flash forward almost 30 years, and Foods by George’s products have come a long way from where they started. When asked about what he has learned from baking gluten-free English muffins, Chookazian offers the two sides to baking bread.

“I can get both technical and romantic,” Chookazian said. “Whether you bake in small batches or high volume, there is a definite science to baking bread of any sort.”

A big factor in bread is yeast. “Yeast is a live ingredient and must be handled with respect,” he explained. “Too hot or too cold, and the final product is inferior.” Then there is the flour. “The wrong balance of flours, starches, gums or water, and the mouthfeel suffers. I had done a lot of research developing my initial flour mix, which was a huge help in creating the light and airy English muffins we produce.”

Beyond the technical, there is a deep love. “There’s a romance to making bread. Of all the products I have ever made, I absolutely love making English muffins. There is nothing else like it. So many variables can influence the final product.”

Most importantly, baking bread is about patience and sensitivity. “Truly great artisan bread takes time,” Chookazian said. “It cannot be rushed. It must be handled with care.”

Your grocery store shelves hold many fantastic brands of gluten-free bread. Try them all and find your family’s favorite. Here are our top recommendations.