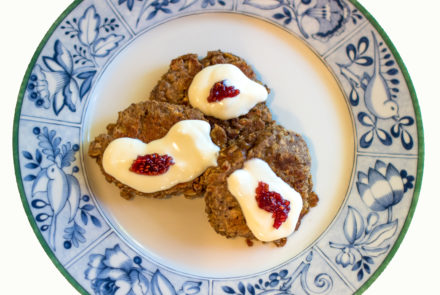 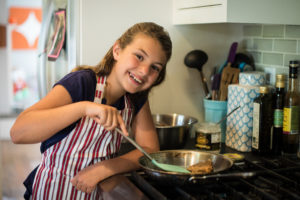 At 11 years old, Mia Wurster impressed fans and celebrity chefs alike on the third season of the popular Fox TV show Masterchef Junior. She cooked alligator, made it to the final 12 and created what Gordon Ramsay called “the best sausage of the year.” When the Wurster family initially went gluten free to benefit her sister Faith, who has cerebral palsy, Wurster was less than thrilled about the new diet. Instead of complaining, however, she became the primary cook for the family and began preparing gluten-free meals she enjoyed. Mia likes this recipe for Protein Pancakes because it is a great way to start the day with lots of energy. “When I have these pancakes for breakfast, I feel much less hungry at lunchtime than if I eat just plain cereal,” she
says. Plus the pancakes are so easy to make that other
aspiring young chefs can do it on their own.

Mash banana in a large bowl. Add eggs to bowl with banana, whisking with a fork to break up all remaining banana pieces. Add almond butter and mix to combine. When mixture is smooth, add oats, vanilla, chia seeds and cinnamon.

Cook’s tip: Be patient—these pancakes take a little while to cook because they don’t have flour.

Mia says cooking for your family can be fun and rewarding. Here are some tips she has for other kids who are drawn to the kitchen.