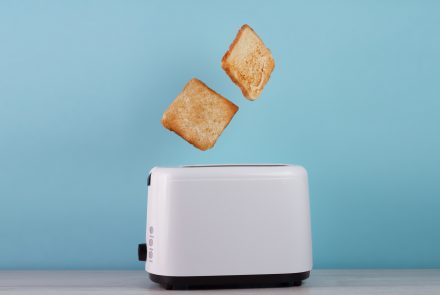 When I became a mom to a child with celiac disease four years ago, I had so much to learn. I mean, like, SO MUCH. I had no idea that gluten was more than breads and pasta. I had no idea that I would basically need to learn a new language to read ingredient labels. And, I definitely had no idea that it was so easy to accidentally cross-contaminate otherwise safe gluten-free foods.

Let me say that again for the people in the back: Just because a food is gluten-free doesn’t mean it is safe for people with Celiac disease.

Over time, I have read and researched and learned enough to get me to the point where I am today – feeling confident that I have the knowledge and tools to keep my daughter safe from cross-contaminants. I have become familiar with the tricky ways that gluten can sneak back into your “safe” foods. Many of these things were surprising to me when I learned them, so I wanted to let you in on the secrets, too. Keep in mind, I am not a doctor. I am just a mom navigating the gluten-free world alongside you.

Here are some not-so-obvious things that I have learned that you need to do to avoid gluten cross-contamination:

Everyone likes a good dip, and many dips can be made gluten-free. This is great for everyone at the party, GF or not. However, if there will be gluten-containing chips or crackers offered, they must NOT be dunked directly into the dip bowl for the same reasons utensils cannot be double-dipped into condiments. Instead, guests should use a clean serving spoon and put some of the dip onto their plate. Cross-contamination crisis averted.

Utensils, that is. This is especially important when making sandwiches. Many condiments are usually gluten-free (always double check your labels to be sure!), including butter, mayonnaise, and mustard. However, if you were to spread mayonnaise onto traditional bread and then put the same knife back into the mayonnaise jar, the mayo is no longer gluten-free. Tricky, right? One false swipe and the condiment will no longer be safe. Always use a new utensil after it comes in contact with gluten to avoid this mistake. Or better yet, use squeeze bottles.

Often at family get-togethers and parties, both traditional and gluten-free snacks will be served. This is fine. However, it is important to keep these items separate at all times. For example, do not place gluten-free crackers on the same platter where they could come in direct contact with their traditional, gluten-containing counterparts.

4. Get a new toaster

This was one of the first things that the gastroenterologist told us to do after we received my daughter’s Celiac diagnosis. Toasters collect the ghosts of gluten past, no matter how hard you try to clean them. It is imperative to get a new one to dedicate to your gluten-free toasting needs.

French fries by themselves are generally gluten-free, as long as there are no questionable toppings or seasonings on them. They are potatoes, after all. HOWEVER, this does not mean that it is safe for a person with Celiac disease to go to a fast food drive-thru and order themselves a large fry. If the potatoes are fried in a shared fryer with other breaded and gluten-containing items, they will no longer be safe! Always, always, always confirm that a fryer is designated just for gluten-free French fried potatoes, and nothing else.

This goes for your hands and cooking/eating surfaces. If your home is not completely gluten-free, you must make sure to wash hands after handling gluten foods and clean all cooking equipment and surfaces very well after food prep. Also, be sure to always thoroughly wipe down tables and counters to ensure no gluten crumbs are left behind accidentally.

7. Be cautious when eating out

Going out to eat after a Celiac diagnosis can be difficult due to cross-contamination concerns. If you are going to a restaurant, make sure the staff is educated on Celiac disease and cross-contamination. It is a good idea to call ahead if attending a new restaurant to see what steps they take to prevent it. At the restaurant, talk to your server to confirm they understand the need for glove changes, separate cooking surfaces, and, of course, designated fryers (see #5 above).

Unlike people who are just looking to reduce their carb intake, people with Celiac disease cannot just throw away the bun on their burger. Once a gluten hamburger bun touches the burger, that burger has been cross-contaminated. Always make sure that your hotdog or hamburger has not come in contact with traditional buns before eating.

So, now that your mind is completely blown, take a deep breath. Yes, gluten lurks everywhere. Yes, it sounds like a lot. But, yes, you can do this. The more we know, the better we do. Keep up the good work! 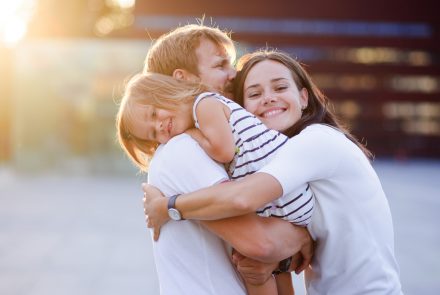 “My belly hurts,” my four-year-old daughter said to me in a hushed voice one summer day in 2015.

This was not the first time she had stated this in recent days. In fact, in the few months leading up to this day she had expressed this feeling many times and even vomited on more than one occasion.

“What is going on?” I wondered. My little girl did not seem sick. Her stomach aches would seem to pass relatively quickly, and after the few times she did vomit in the past she would be back to her usual self immediately. Yes, she was small for her age and had difficulty gaining weight, but that was just her body type, right? I repeatedly chalked these issues up to simple explanations. “She must have eaten too much.” “Maybe she is nervous about sleeping away from home on our upcoming vacation.” “Maybe she is just pretending, and her belly doesn’t even hurt.”

But finally, on this specific July day, I decided to call her pediatrician and make an appointment. Just in case.

At our appointment, my husband and I relayed the unexplained symptoms to the doctor. I truly expected the pediatrician to brush everything off and say it was nothing to worry about. Instead, she ordered bloodwork which included a battery of tests to hopefully rule out any issues. She ordered the usual blood counts, as well as various allergy tests, and then added a celiac panel.

“A celiac panel? Huh…” I thought to myself. Celiac disease had never been on my radar – not even a little bit— and I am pretty good at worrying about all possible outcomes, if I do say so myself.

“Ok,” I responded to the good doctor, as I knew it couldn’t hurt.

Several days later, the pediatrician gave us a call and delivered the unexpected news. The results of our daughter’s celiac panel were off the charts. We would need to follow up with a gastroenterologist as soon as possible to discuss this further.

Approximately one month later, after our GI appointments, as well as an endoscopy and biopsy, our daughter officially received a diagnosis of celiac disease. We were shocked.

I had heard of celiac before. I knew one person who had been previously diagnosed. But, in reality, all I knew about it was that it was the condition where you cannot eat gluten. I had no idea about what gluten actually did to someone’s body who had celiac disease and how serious it actually was. My family had a lot of research and learning to do.

I searched the internet for everything I could find on celiac disease. We attended a family information session given by our children’s hospital and were sent home with packets of information. To say that we were overwhelmed is an understatement.

Despite my previous beliefs, gluten was so much more than bread and pasta. Gluten could be hidden in ANYTHING. I had no idea. Reading ingredient labels felt like learning a new language. I learned about cross-contamination, and how to prevent it, for the first time.

I had no idea how much would be needed to be done to keep my daughter safe and healthy.

My daughter, being so young at the time, was not phased by the diagnosis. She did not grasp the implications yet or the long term changes that would need to be made. However, while I was so relieved to know that celiac is easily managed with a lifelong and completely gluten-free diet, I worried.

I worried that my daughter would have a very limited diet from then on. I envisioned basically only produce and meat. How were we going to find things for her to eat that she liked? Could she ever enjoy her favorite treats again?

I worried that I would not do a good enough job keeping her food free from cross-contamination. Could we even keep gluten foods in our home anymore? How would I ensure that her food was safe when she was around others who were eating gluten?

I worried about how my daughter’s lifestyle would be impacted by having to be forever gluten-free. What would she do at birthday parties? She loved sharing cake with her friends. Would she ever be able to eat out again? Restaurants were basically her favorite places to visit.

I worried about it so much. But now, looking back at that stressful time, I realize that I did not need to agonize over things the way that I did.

It has now been four years since my daughter’s diagnosis of celiac disease. Very quickly after going gluten-free she stopped complaining about her belly aches, and she began gaining weight. Her appetite also improved significantly. We were (and still are) thrilled at the changes we saw in her.

Slowly but surely, we got the hang of finding foods that were delicious and safe for her. I was pleasantly surprised at the number of gluten-free alternatives to our everyday favorites that were available in our local grocery store, as well as how many foods that we already loved were naturally gluten-free.

Ingredient labels are no longer confusing (most of the time), and we have a system down pat for parties and playdates.

Good handwashing during food handling and healthy habits are now second nature to everyone in our home. Our extended family and friends have even learned important tips and tricks for keeping food free of gluten contaminants.

Through research and networking, we have even found a few restaurants that we can trust to provide safe gluten-free options.

And, as far as my daughter is concerned, she has handled her lifestyle changes very well. She knows that she has celiac disease and does not hesitate to let everyone around her know it, too. She has learned to self-advocate and checks if something is gluten-free before eating. Of course, there are times when a moment of disappointment strikes when she sees someone eating something that she cannot have, but we try to alleviate this by having equivalent gluten-free alternatives available always.

So, if any parents reading this have children who have been newly diagnosed with celiac disease, please know that it will be ok.

Our kids are resilient and they will still be able to find tons of foods that they enjoy.

As parents, you will learn all of the things you need to know, and before you realize it, you will be the ones reassuring and educating others.

I know this may feel like an insurmountable challenge right now, but you really will do great. Take it from someone who has been there.

Mia Carella blogs at This Mom With a Blog.