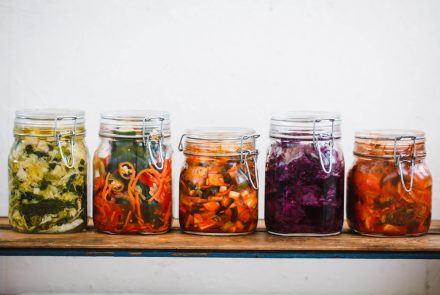 Currently, fermented foods are one of the hot food trends in the American diet. You probably already eat some of the most commonly available fermented foods. Yogurt, wine, some types of cheese, cider and sauerkraut are all fermented.

But what about kimchi, kefir and kombucha? Are these and other fermented foods desirable and safe for those on a gluten free-diet, and what are their potential benefits?

The answer begins with understanding fermentation.

Fermentation is nothing new. It’s been around for hundreds of years and was originally used to preserve and extend the shelf life of food. Fermentation is the chemical change that occurs when sugars and starches in a food are exposed to bacteria, molds or yeast.

For example yogurt is formed when lactose, a milk sugar, is exposed to bacterial enzymes, breaking down the sugar and making it more easily digested. Wine is produced when fructose, fruit sugar, is converted to carbon dioxide and alcohol in the presence of yeast. Gorgonzola cheese is made when a Penicillium mold is combined with milk and allowed to age.

A byproduct of fermentation is the growth of the microbial population in these foods. We know these microbes as probiotics, which have received attention in recent years for their potential benefits for digestive health.

The gut flora, also known as the intestinal microbiota, has an influence on health, and diet has an effect on our individual gut microbiome, or the collection of microorganisms that co-exist within us. In healthy people gut bacteria work in a symbiotic relationship with the body. The food we eat provides energy for the microbes and they, in turn, keep us healthy.

A balanced gut microbiome is beneficial because it:

Recent research suggests that reduced microbial diversity is associated with a variety of diseases, including inflammatory bowel disease, colon cancer and even obesity. Changes in the gut microbiome may also explain why some celiac patients have persistent symptoms despite strict adherence to a gluten-free diet.

A group of Finnish scientists studied the intestinal microbiota of two groups of celiac patients. One group had continued gastrointestinal symptoms after following a strict gluten-free diet for several years, even though their small bowel biopsies and antibody tests did not show evidence of active celiac disease. The other group did not have gastrointestinal symptoms.

Results showed that patients with persistent symptoms had different and less diverse intestinal microbiota composition compared to patients who did not have symptoms. The study, reported in the American Journal of Gastroenterology in 2015, concluded that celiac disease patients with continued symptoms had “reduced richness of bacteria.”

Scientists understand that having more varied types of bacteria in the gut is beneficial to overall health. Several studies have demonstrated that those individuals who eat more fiber have greater diversity in their microflora. Conversely the typical Western diet, which is low in fiber, seems to be associated with less variety in the microbiome.

Fermented food in the GF diet

Since good bacteria can influence health, it makes sense that fermented foods could play a beneficial role in a gluten-free diet. Though some of these foods may be new to you, consider experimenting with them. Here is a primer to get you started.

Kimchi, which is gluten free, is a traditional Korean food most often made from Napa cabbage seasoned with chili pepper paste, ginger, garlic and fish sauce. It has a pungent, sour flavor that comes from the lactic acid produced during fermentation. Fans of this Korean staple describe it as addictive.

Historically kimchi was fermented by placing seasoned vegetables in clay pots and allowing them to ferment for months underground. Kimchi is used as a condiment or side dish in traditional Korean cuisine and is served at nearly every meal. Pair it with a bland food like rice, baked potato or gluten-free noodles. It can also spice up eggs and embellish a sandwich.

Kimchi comes in dozens of types, from super spicy to mild. Some of the most popular are made from daikon radish and cucumber. Kimchi is low in calories and high in fiber and B vitamins. Most commercial brands are also high in sodium. To minimize your sodium intake, choose small portions. Kimchi is meant to be served as a condiment. You’ll find kimchi in the refrigerated produce section of many supermarkets and in Asian groceries.

Kefir is a cultured milk product similar to yogurt, though it has a thinner consistency and a tarter taste. It comes in plain, vanilla and fruit flavors, and is sold in most supermarkets and health food stores.

Kefir is made with more strains of beneficial bacteria than yogurt, so it can have a powerful probiotic effect. It may be well tolerated by those with lactose intolerance, as fermentation partially breaks down this sugar.

Most kefir is gluten free. The starter cultures for kefir are referred to as “kefir grains” but are not derived from grains at all. Be aware, though, that some brands do use oats as a fiber source, so read labels carefully because the oats that are used are not specialty gluten-free oats. Kefir is an excellent source of protein and calcium. It’s low in fat and provides B vitamins, which may be deficient in a gluten- free diet.

Not all brands are fortified with Vitamin D, which aids optimal calcium absorption. Serve kefir as a beverage, use it as a base for smoothies, or moisten cereal or granola with it.

Kombucha is a fermented tea that originated in China. It is made from sweetened tea and a colony of bacteria and yeast called a zoogleal mat. Kombucha is naturally effervescent and tastes similar to apple cider vinegar. It is often blended with juice to tone down its flavor and appeal to Western tastes.

A variety of flavors are available, including ginger-lemon, cayenne pepper, various fruit flavors, and even beet and carrot. Most flavors have about half the calories of soda and are high in B vitamins. Home brewing of kombucha is popular, but there have been reports of illness from contamination with aspergillus bacteria, which can be deadly. You can avoid this danger by purchasing commercial kombucha, but some brands are pasteurized, killing many of the live cultures and beneficial bacteria.

Nearly all kombucha beverages are gluten free. As with any multi-ingredient food, be sure the read the label.

Natto is a native Japanese food made from steamed, mashed soybeans. It is fermented with the bacterium Bacillus subtilis, which produces a sticky, stringy coating on the beans. Traditionally eaten for breakfast, it has a strong odor and many consider it an acquired taste.

Natto is usually served over rice with Japanese condiments such as dried seaweed, green onion, daikon radish, mustard or soy sauce. It is quite nutritious, providing a rich source of protein, fiber, iron, copper, calcium and manganese as well as magnesium, riboflavin, thiamin, potassium and Vitamin E.

Unlike many other fermented products, it is low in sodium. Plain natto is gluten free, but it is often sold in single-serving containers along with a packet of soy sauce, which may contain gluten. Natto is sold in Asian markets and some natural foods stores.

Tempeh is another fermented soy product, this time originating from Indonesia. The beans are soaked, dehulled and cooked, then fermented using a mold, Rhizopus oligosporus. The final product is formed into a dense patty that can be sliced, cubed or grated. It is often used in vegan diets as a meat alternative and has a mild, nutty flavor.

Traditional tempeh is made with soybeans alone or mixed with rice, but some commercial brands add barley or wheat-containing soy sauce. A few tempeh products are labeled gluten free, including two Tofurky varieties: Organic Soy and Organic 5 Grain.

Tempeh is a rich source of calcium, iron, copper, B vitamins, manganese, magnesium, and zinc while being high in protein and low in fat. Unflavored varieties are low in sodium as well. Another benefit of fermentation is that some of the soybean’s gas-forming fibers are broken down, making them more digestible.

Tempeh is fairly versatile given its firm texture. Try it sautéed with vegetables, marinated and grilled, or cubed into stews or chili. You’ll find tempeh in most health food stores and in the refrigerated produce section of many mainstream supermarkets.

Miso is made by fermenting salt and soybeans with the fungus Aspergillus oryzae to create a paste that is an essential condiment in Japanese cooking. Sometimes cultured grains are also included, chiefly rice and barley.

Read labels carefully. Miso is traditionally made into a soup but is also used for marinating fish, sautéing vegetables or as a flavorful spread for sandwiches. White miso, or shiromiso, has a mild, slightly sweet flavor, while red miso, or akamiso, is stronger and more astringent. While low in fat and calories, miso is very high in sodium, providing as much as 700 to 1,100 milligrams per prepared cup.

To get the most benefit from fermented foods, remember these tips:

This article was originally published in the March/April 2015 issue of Gluten-Free Living.