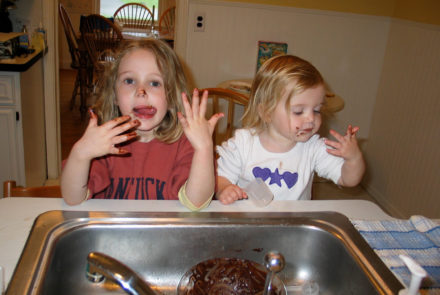 When Jen Frank’s daughter Abby was 3 years old, she was very tired and irritable, yet she could not quite articulate what was wrong.

Eventually the little girl was diagnosed with celiac, the autoimmune condition in which the affected person cannot tolerate gluten, a protein found in wheat, barley, rye, spelt and some oats. As those with the disease well know, when gluten is ingested, the body launches an immune response that attacks the small intestine.

Celiac is not uncommon, occurring in about 1 percent of the population, notes Dascha C. Weir, MD, associate director of the celiac program at Boston Children’s Hospital. Still, after the diagnosis, Frank worried that Abby would be different from other kids.

Parents of children who are newly diagnosed with celiac face unique challenges. Because of their children’s dietary restrictions, parents might worry about what the kids will eat at social events like birthday parties or, as teenagers, meals out with friends. They might also wonder how to talk to other adults in their child’s life about their dietary needs and how to find safe restaurants, among other issues.

Symptoms of celiac include abdominal pain, nausea, diarrhea or fecal soiling/constipation, but children can present with other symptoms, like low energy, poor growth or delayed puberty. Although rare, some kids with celiac may become extremely ill and require hospitalization, while others have no symptoms at all. Conditions like thyroid disease or diabetes predispose a child to celiac, Weir says.

Long-term, untreated celiac exerts negative consequences such as malabsorption and nutritional deficiencies, which can lead to anemia, osteopenia, stunted growth, infertility and even malignancy, according to Weir.

The only treatment is to remove all gluten from the diet.

After your child has been diagnosed with celiac, the first step is to see a nutritionist and learn how to adjust your food preparation and your child’s eating, Weir says.

“The treatment of a very strict gluten-free diet with close vigilance to cross-contamination is a real shift in how your family prepares food and how you interact outside of the household in terms of events and things that have food,” Weir says, and that is hard to do on your own.

It is a “huge learning curve,” adds nutritionist Tara McCarthy from Boston Children’s Hospital. Someone who used to spend 20 minutes in the grocery store may now take two hours as they read labels and look up safe foods on their phones.

“It becomes a new normal, but we teach families that they really do need to read labels,” Weir says, “and kids learn it really early, actually.”

Gluten-free products available in stores have expanded exponentially in the past 10 years, making them easier to find. However, other challenges, including the high cost of gluten-free packaged items and issues of cross-contamination, are of great concern for those with celiac.

“We know very, very small amounts of gluten can continue to activate the autoimmune process and lead to ongoing damage in the small intestine,” Weir says. “The level of vigilance that you need to avoid cross-contamination requires a lot of understanding and education.”

Oats are a complicated topic right now because those that are standard grown in the U.S. may be contaminated with wheat, rye or barley. In order for oats to be safe for someone with celiac, they must be purity protocol oats (as opposed to mechanically sorted), which guarantees they have been grown on fields free of gluten for two years, McCarthy says.

Try to concentrate on foods that kids can eat (not those that they can’t), like all fruits, all meats, beans, vegetables, and most nuts and dairy products, McCarthy says.

“It’s a big transition for some kids,” Weir explains, “and a lot of kids feel left out of birthday parties or school celebrations that are food-based when there’s treats they can’t have.”

Sometimes other parents will not understand your child’s needs. Frank recalls a school event for which parents were responsible for bringing snacks. Another parent, a family medicine doctor, promised to bring gluten-free rice crackers. But when the day arrived, the woman did not bring the right type of crackers. The woman was a doctor, and even she didn’t get it, Frank stresses, but adds that more often than not, in her experience, people have shown support.

Do your best to educate the people around you and advocate for your child, Weir advises.

Because celiac runs in families, if one sibling is diagnosed with it, usually other members of a household are tested as well. After Abby was diagnosed, the whole family was tested. While Frank’s and her husband’s results were negative for the disease, her oldest daughter, Emma, was also diagnosed with celiac.

Frank, who works as a family partnerships coordinator for Boston Children’s Hospital, said after her girls (who are now 15 and 18) were diagnosed, her goal was to ensure that they did not see celiac as a burden. She bought a second freezer and stocked it with gluten-free snacks for last-minute outings and events that popped up. The auxiliary freezer held gluten-free cupcakes the girls could take with them to birthday parties and ready-made quinoa meals that did not require refrigeration if the girls needed snacks or meals when outside the home on play dates. She also tried baking from both scratch and gluten-free mixes to come up with a list of dishes the family liked to eat.

It’s fairly easy to make small adjustments in your house so you can still make your favorite recipes, Frank notes. Pick up gluten-free flour, soy sauce and breadcrumbs, she suggests.

“A lot of kids are just so glad that they’re feeling better, the transition to a gluten-free diet feels very worth it to them,” Weir adds.

When Emma and later Abby Frank turned 13 and started attending bar and bat mitzvahs for other children, they would eat beforehand.

Since the diagnoses, the family has gotten the hang of reading food labels. They eat a lot of quinoa, black bean pasta and vegetables, fruits, meats and some oats.

While “it’s not a challenge to find delicious food,” eating out at restaurants can be tricky, Frank explains. She has found California Pizza Kitchen to be a safe place. Sushi from Whole Foods has become a staple snack, and Five Guys offers a burger on a lettuce wrap, so her girls go there.

She advises other parents seeking restaurants that will be safe for their child to call ahead and ask questions. You need to know the restaurant’s procedure for keeping gluten-free products separate from foods with gluten, a key element to avoiding cross-contamination, Weir notes.

Having two children with celiac has not stopped Frank and her family from traveling the world (Italy, Sweden, Iceland, Costa Rica). Finding gluten-free restaurants while abroad becomes part of the adventure, she says. It is pretty easy to find safe restaurants when traveling by using social media as your guide.

Her advice to other parents is to stay positive and help their children realize that they are different but to embrace that difference and not let it stop them from enjoying life, friends and family.

“It’s just food,” she says, “and it’s totally livable.” At the same time, it is a big deal and it has an impact on your daily life.

Try to get subscriptions to magazines about being gluten free, and visit credible online resources such as celiac.org to learn more, she suggests. It does get easier. Today, Frank probably cooks five to seven days a week. The meals include homemade sushi, burritos, fish, vegetables and potatoes, and roasted chickpeas. She proclaims that while she’s not that great a cook, the recipes are not that difficult.

Adjusting to celiac is a highly individualized process, Weir adds, which is why Boston Children’s Hospital refers families to Celiac Kids Connection (Celiackidsconnection.org), a support group with the goal of connecting newly diagnosed families with other celiac families for information and support. They try to assess each kid and follow up with them to help with the challenges they face. Issues change over time and with each developmental phase for children. For some kids, when they are young, celiac is less of an issue but becomes harder as a teenager.

Take a breath. You will learn the diet, but make sure to find support, suggests Francie Kelley, the executive director of Celiac Kids Connection.

Cost is definitely an issue. Try to keep track of everything you buy, and research tax deductions you may be eligible for, Frank suggests. Also look into gluten-free food pantries in your area.

For those who don’t have access to comprehensive offerings nearby, try websites like GlutenFreeWatchdog.com, where a registered dietitian tests products that claim to be gluten free to ensure they really are. Abby and Emma Frank started the Instagram @sistersansgluten, where they provide tips about being teenagers and eating gluten free.

“The big message is that the gluten-free diet is hard, but it’s totally doable,” Weir says, “and you just need to support that child as best you can as they’re figuring it out.”

Want more information on celiac and kids? Check out our Kids section!