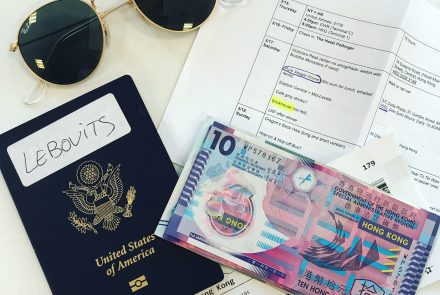 It could be fine. I could eat rice. I could bring a ton of crackers and bars. My trip to Hong Kong and Beijing could be “manageable” with celiac disease. But as a dietitian and a food lover, enjoying food and native cuisines is a huge part of what makes traveling so amazing. So although I could have eaten rice for eight days, that just wasn’t going to work for me.

I had always wanted to go to China. I knew that with enough research and planning, I could experience China the way anyone else would, without any added consequences. So I set to work. Initially, I was discouraged by what Google had to offer. I moved on to the Find Me GF app for more ideas, with some success. The most helpful tool at my disposal turned out to be Instagram. I searched for people who had gone to Hong Kong and Beijing and had posted about where they ate. I reached out to the people behind a number of great accounts who travel frequently and have celiac disease. These awesome individuals either provided me with great recommendations or connected me with someone else who could.

Luckily, I had a few months to prepare, so I sent all of my potential restaurants a standard email asking specific questions about whether or not they would be able to accommodate a diner with a severe gluten allergy. Plenty of places did not respond at all. I attempted to call a few, but the time difference made that difficult. Nevertheless, I received multiple educated responses. Some restaurants were honest and admitted that they would not advise me visiting. But a number of places were more than happy to welcome me.

Feeling confident, I set out to put together all of the puzzle pieces. I know that traveling with celiac disease requires more than just finding places that are safe. I would likely not be able to just pop in on busy nights, which could leave me hangry. Therefore, I arranged when I would want to do each activity, and I then filled in the restaurant and drink spots and made reservations accordingly. In addition, I reached out to hotels to find ones that would be able to help me find gluten-free restaurants as well as offer safe options for breakfast. 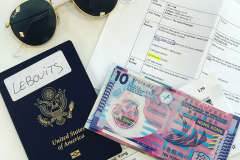 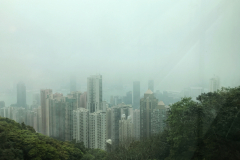 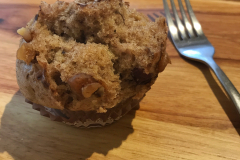 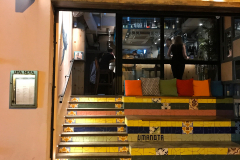 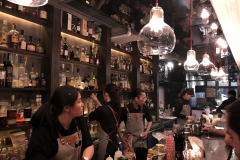 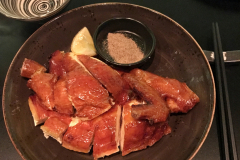 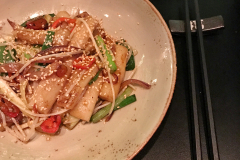 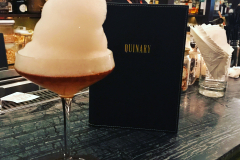 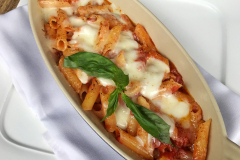 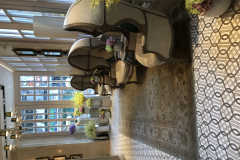 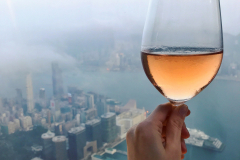 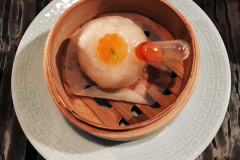 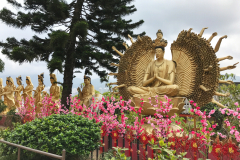 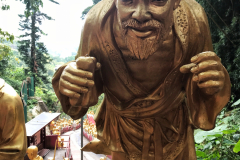 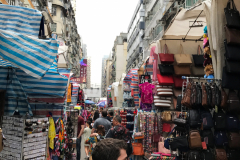 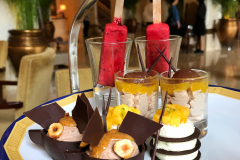 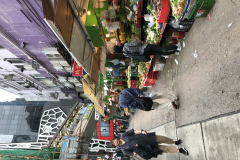 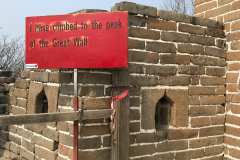 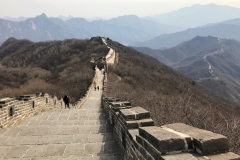 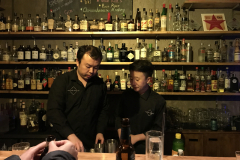 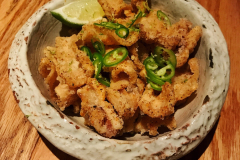 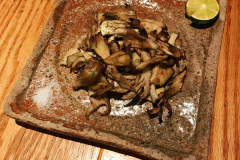 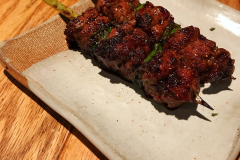 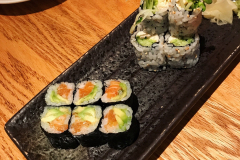 When I arrived, I was welcomed to The Pottinger Hong Kong in Central Hong Kong. There was not a single bad review of this place on the internet, so I was sold! They provided a delicious breakfast with multiple options—and such a pretty setting! I switched back and forth between cheese and veggie omelets and eggs sunny side up with a side of gluten-free toast. I also grabbed fresh fruits and juices from the breakfast bar. The servers were so kind, and every morning let me start my day on a high note.

The first day of the trip, I climbed Victoria Peak. There is the option of taking the tram to the peak (the highest point in Hong Kong), but I was feeling adventurous and chose to hike. The peak offers the most incredible views of the city…when it’s not foggy. My pictures looked like I was standing in front of a white screen because of all the fog. Afterward, I was ready to eat. I was excited to try out a place that offered gluten-free dim sum. Unfortunately, when I arrived, I was not comfortable with the responses I received from the staff. This led me to wander around and happen upon a delightful cafe, Fresca. Fresca was an adorable place with a variety of nutritious options. They had a sign outside advertising gluten-free muffins, and the staff was so warm and helpful. I had an awesome banana nut muffin and even came back for a healthy snack the next day. As difficult and intimidating as it can be for a traveler with celiac to improvise, don’t forget to keep your eyes open and consult a friendly face.

The evening came, and it was time to explore the great places Hong Kong has to offer. I settled on the bar Quinary, which boasted the most unique cocktails, including the earl grey caviar martini. I advise you sit at the bar and watch the bartenders work their magic. For dinner, I had planned to visit Brickhouse, but I heard rave reviews of a restaurant called Ho Lee Fook. This was not a place on my list, but the staff there assured me they could make me a safe meal. I started with the crispy skin chicken that came with an exquisite salt mix and then moved on to the flavorful stir-fried vegetables of asparagus, broccoli, sugar snap peas and garlic. Everything was superb, and I was in heaven while I ate the wok-fried cheong fun with XO, white garlic chives and toasted sesame. Full of happiness and noodles, I wandered the lively streets of Lan Kwai Fong. With so many bars to choose from, I went all the way up to CÉ LA VI for a beautiful view of all of them and the city’s skyline.

After such a successful day, I was optimistic about the remainder of my trip. It was time to venture to the other side of Hong Kong Island and see the beauty the oceanside had to offer. I highly recommend the Dragon’s Back hike as the views are wonderful, the hike is enjoyable, and the trail ends at a small beach town very different than the city center. After working up an appetite, I went to DiVino Patio for baked pasta to refuel. Later on, I went across the river to the Kowloon side and up the 1,588 feet of the Ritz-Carlton to the Ozone Bar. I went before sunset, so I could get the daylight and the nighttime view. Dinner was at Mott 32. The atmosphere was incredible, as it is set in an old bank. They even had an extensive gluten-free menu. I enjoyed the truffle salad with Peking duck along with more delicious wok-fried rice noodles with angus beef. The highlight was definitely finding gluten-free dumplings. I had almost given up on finding them, but there they were on the gluten-free menu. I ordered the lobster har gow, injected it with the lobster oil as instructed, and happily checked it off my list of foods to try.

The next day involved riding the ferry across the river, touring the Ten Thousand Buddhas Monastery, and scouring for deals at the Ladies Market. Finally, I made my way over to the afternoon tea line at The Peninsula. It offered great window shopping as well as people-watching, but nothing compared to the beautiful spread The Lobby provided. My plates were just as gorgeous as the ones all around me. I was overwhelmed by all of the tasty gluten-free scones, sandwiches, spring rolls, popsicles and chocolate desserts.

Sad to leave Hong Kong, I packed my bags for Beijing. I chose to stay at the Westin Chaoyang. The staff there went above and beyond my wildest expectations. I was treated like a celebrity because of my dietary requests. At check-in, the chefs came out to greet me, I was introduced to all of the cooks, and I was given a tour of all of my options at the breakfast buffet. I started off at the omelette station, but by the end of the trip, I was eating a more customary hot noodle soup with herbs and spices for breakfast. The hotel even offered to make me to-go food to bring with me while I was out touring.

The stakes were higher in Beijing, given that fewer people spoke English and maneuvering in dicey public restrooms (often no toilets—just holes in the floor). The first evening, I had more traditional Chinese food at the hotel’s restaurant, Zenses. As much as I like to think I am an adventurous eater now, when I was told the pork and gelatin cubes were gluten free, I went straight for the more familiar stir-fried vegetable noodle dish.

Beyond excited for the opportunity to see the Great Wall, I packed up a backpack and made the drive through the more rural parts of Beijing. I toured the Mutianyu section of the wall and climbed to the highest point that the wall was preserved. That night, I celebrated the accomplishment with a huge bowl of flavorful pho and a chicken flatbread at a casual restaurant called 4 Corners. Ready for another day of 10,000+ steps and a blast into the past, I visited the Forbidden City and Tiananmen Square.

On the last full day, I strolled through Beijing’s 798 Art Zone. Cool stores and galleries line the streets. I also took a trip to the Silk Market. It was quite the experience dodging aggressive vendors, but you can find some hidden gems. For the final night, I had to go for drinks at The Opposite House hotel before dinner. When I heard Beyoncé had stayed at this hotel, it became a must-visit. Unfortunately, actually staying there was out of my price range, so a cocktail at the bar would have to suffice. I ordered the basil pineapple margarita, and it immediately ranked as one of the most delicious and refreshing cocktails I’ve ever had. It smelled and tasted of basil with every sip. For dinner, I ordered a spinach artichoke dip and the salmon bibimbap from Moka Bros. The salmon was fresh, and the bowl had many delicious, filling ingredients, including black rice, roasted pumpkin, kimchi, seaweed, avocado, carrots and a poached egg. Ironically, this was the only time on the trip I actually ate rice.

By the end of the trip, my stomach was full, and I was grateful to have had such a wonderful experience. It seemed like a great feat to have traveled to China in a way that others would and to avoid getting “glutened” the entire way through.