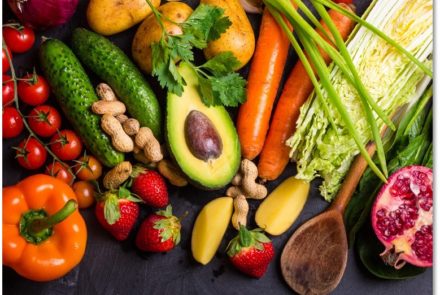 Alicia M. Ojeda, culinary programs manager at Living Light Culinary Institute, explains the raw vegan diet and how to safely incorporate it into your daily life.

The raw vegan diet may seem like a new trend, but it’s technically not when you consider that all the food prehistoric humans ate was uncooked—at least until the discovery of fire. Many people credit the 19th-century Swiss nutritionist Maximilian Bircher-Benner with establishing the foundation for what has evolved into today’s raw vegan diet. But what exactly is a raw vegan diet, and is it safe? Gluten-Free Living turned to Alicia M. Ojeda of the Living Light Culinary Institute in Fort Bragg, California, to learn more about the raw vegan diet, dispel common myths and uncover potential pitfalls.

FRIEDA WILEY: What exactly is a raw vegan diet, and why do people adopt it?

ALICIA M. OJEDA: A raw vegan diet is a diet primarily based on fruits, vegetables, nuts and seeds to the exclusion of dairy—all in its natural state and minimally processed. Some people actually consume raw meat and eggs in some raw diets, but a raw vegan diet is 100 percent plant based. People adopt these diets for a variety of reasons, including to detoxify the body, improve their overall health, help lower their cholesterol, lose weight, reduce their carbon footprint, improve their athletic performance, etc. There have been many athletes who have adopted vegan or raw diets who have reported significant improvements in their athletic performance.

FW: Is it possible to eat a 100 percent raw food diet and be completely healthy? Why or why not?

AO: That question has mixed answers even within the raw food community. I believe being fully raw is possible, but we do need to consider supplementation when it comes to vitamin B12 and vitamin D, depending on the climate in which you live (vitamin D shouldn’t be an issue in tropical climates). There have been some studies showing it’s always a good idea to have your B12 levels checked—whether you’re a vegan or raw vegan.

My understanding is that B12 comes from the soil, but because our soil is depleted and, as a society, we wash our produce, we don’t get the B12 we once did. People who eat an animal-based diet are said to get B12 from eating meat, but there have been some studies comparing carnivores and herbivores side by side that found both groups had B12 issues.

I also believe the bioindividuality and Ayurvedic doshas (an Indian principle that different mind-body types have varying dietary, spiritual and environmental needs to achieve balance) come into play here, too. For example, people who have digestive challenges may need to lightly steam their vegetables to digest them more easily.

FW: Where do raw foodists get their calcium from?

AO: According to the acid-alkaline theory, the body is in its healthiest state when it is slightly alkaline. When we eat processed foods, sugar, red meat, etc., we make ourselves susceptible to disease because these foods form acid in the body. The body’s goal is to achieve and maintain homeostasis, but when the body is in an acidic situation, it will leech calcium from our bones.

Plant-based food such as oranges and sesame seeds are rich in calicum, and it’s a form that’s bioavailable. This means the form of calcium these foods contain can be easily absorbed by the body. Spinach is also high in calcium, but it contains compounds called oxalates that bind calcium and make it difficult for the body to absorb the calcium found in spinach. To get around this, it’s important to eat spinach with citrus foods, because the combination of the two together makes the calcium more absorbable.

There are also some other ways to help strengthen your bones. Getting sun exposure—the best form of vitamin D—will help with bone formation, too. Dark leafy greens, natural sea salt and sea vegetables are highly mineralizing and support bone health.

FW: Where do raw foodists get their protein from?

AO: Every nut, seed and vegetable has a percentage of fat, protein and carbohydrates. We get our proteins from nuts, seeds and legumes. It’s very much a misnomer that you cannot get enough protein on a raw vegan or vegan diet.

There’s a high protein content in broccoli, legumes and hemp seeds. In fact, hemp seeds contain protein in the form of amino acids, which is a more bioassimilable form, so the body doesn’t have to adjust for that. When you consume other protein, the body has to expend energy to break that protein down into amino acids the body can readily use.

for those who are interested in learning more, there’s a book called Becoming Raw by Brenda Davis, Vesanto Melina and Rynn Berry that actually shows you how to calculate the exact amount of protein you need.

FW: Isn’t it expensive to eat a raw diet or become a vegan?

AO: I would say no, as long as you eat with the seasons and eat the food that is locally grown within your community as much as possible. It also helps if you use fresh fruits and vegetables more than nuts and seeds and are sprouting your own seeds and legumes.

Grow foods indoors and fortify your soil with kelp to help replenish the nutrients in the soil. It’s more important to eat fresh fruits and veggies. And better to eat fresh fruits and veggies even if they’re not organic than to not eat them at all because of the nutrients they provide. Fruit in itself varies, and if you look at the whole rainbow array of fruit, you get so many antioxidants and nutrients, I think fruits are nature’s superfoods.

I’ve found these last few years I’ve focused on eating more fresh fruits and greens, and it’s more affordable. It’s when you get into using a lot of the superfoods or exotic foods that it becomes expensive. It’s kind of like when you’re a carnivore and you buy high-end meats.

FW: What advice do you have for readers who still may feel adopting a raw vegan diet is extremely difficult or impossible?

AO: It’s not about being 100 percent raw. It’s about adding more fresh whole foods to your diet. Start with a few vegetables and fruits, and then keep adding more over time. Your palate will change, and you’ll start desiring more fresh fruits, vegetables, nuts and seeds.

Frieda Wiley is a freelance health writer and consultant pharmacist based in the piney woods of East Texas.
Twitter: @Frieda_Wiley