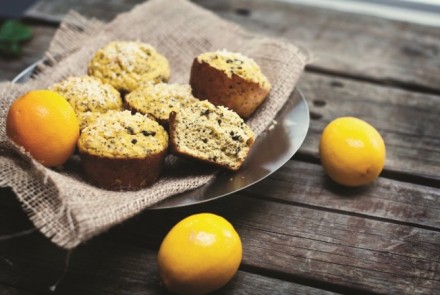 Coconut, known as “the tree of life” in the Philippines, “the tree which provides all the necessities of life” in Sanskrit, and “the tree of a thousand uses” in Malaysian, has become quite popular in the Western diet in the past decade. These names reflect the fact that almost every part of the coconut palm can be used by humans in some manner.

Coconut flour, which is naturally gluten free, is one of the many uses of coconut surging in popularity.

More people who follow the glutenfree diet are choosing coconut flour over other gluten-free flours because of its health benefits. Unlike nut flours, coconut flour contains little fat and no phytic acid, which reduces the absorption of minerals. It has the highest fiber of any “flour,” is low in net carbohydrates, with most coming from indigestible fiber, is low on the glycemic index and is high in protein, containing about the same amount as whole wheat flour.

Coconut flour, as well as almond flour and meal, are mainstays in the Paleo diet, which doesn’t allow any grains and as a result is naturally gluten free. In addition to prohibiting wheat flour, the Paleo diet also excludes gluten-free flours including rice, corn, soy, quinoa, amaranth and teff. Coconut flour is used a bit more often in Paleo recipes because it is less expensive than almond flour and contains more nutrients, as well as being lower in calories and fat and higher in fiber and protein. In addition, almond flour contains high quantities of phytic acid.

Still, many Paleo recipes call for a combination of coconut and almond flour in baked items because coconut flour alone does not work as well as when it is paired with another flour.

What to look for

Coconut flour is produced in a few ways, but the most common method is to grind the dried and defatted flesh of coconuts into a fine powder. Some brands use a toasted version resulting in golden-colored flour while others use little to no heat in the process, which produces slightly off-white flour. Because coconut flour is made in a variety of ways, each brand acts differently when used in a recipe.

Choosing a brand of coconut flour for baking is a bit like finding a favorite brand of coffee beans or dark chocolate. It takes some time, some investigation and some experimentation on your own.

Good-quality flour has a sweet, coconut scent and a smooth, but not overly fine, consistency. Although some lumps are to be expected and should be sifted out before baking, overly lumpy and coarse flours are of poor quality and will affect the end result when baking. More than with other flours, recipe results vary widely depending on the brand you use. I’ve tried and had good results with Let’s Do…Organic, Nutiva and Coconut Secret.

Let’s Do…Organic is a bit coarser ground than other brands and therefore absorbs a little less liquid. As result, you can use a bit more of the flour in a recipe and a bit less of the liquid ingredients. Nutiva coconut flour is always consistently ground — slightly coarse but not too fine — and has worked well in every recipe in which I’ve used it. It also has the lowest calorie count I’ve found.

Coconut Secret is the only brand that uses a heat-free method to make its flour, and the company calls it a raw flour. Because it is processed under cool conditions, this flour is lighter in color than all the other brands. It is also a bit clumpy and must be sifted before using. Still, I like using this flour in cakes and muffins because it gives consistent results.

When you delve into gluten-free cooking, coconut flour alone may not be the best choice for your first few tries. It is a bit trickier to use because it absorbs so much liquid, and recipes that you already have will be difficult to convert. Instead it’s best to use recipes specifically made for coconut flour or coconut and another flour.

Cup-for-cup flour blends that replace wheat flour in recipes in the exact same amount are the easiest choice for gluten-free beginners, but most do not contain coconut flour. A few that do include Gluten Free Mama and Wilderness Family Naturals coconut flour blends.

Gluten Free Mama Coconut Blend combines white rice, tapioca, coconut blend and sweet rice flours and potato starch. The company says it can be used as a cup-for-cup alternative in recipes due to the combination. Gluten-Free Mama also makes an almond blend flour.

Wilderness Family Naturals Blend combines coconut, sorghum and almond flours and tapioca root. The company says it can be used for all types of baked goods, including pancakes, muffins, quick breads and raised breads. These blends can be a good way to start using coconut flour in your baking before trying to combine coconut and other flours on your own or making a complete switch to coconut and almond flours.

You can also use other nut flours in combination with coconut flour. These include hazelnut, cashew and macadamia nut, all of which can be made easily by grinding the nuts into a fine crumb in a food processor. This is where experimentation comes in. As you begin to learn which combination of flours paired in different quantities affects the outcome of the final product and, ultimately, its texture, you will master cooking with coconut flour.

Coconut flour’s tropical flavor profile works best in baking and dessert recipes, although it can be used as a batter and also to thicken sauces and gravies. The subtle coconut flavor works very well with sweet flavors, so it’s suited to batter shrimp or seafood but would be less pleasing in a savory dish such as beef stew. In baking, coconut flour makes lovely cakes, quick breads, muffins, cupcakes and biscuits, but can lead to softer-textured cookies and pie crusts. Because it is usually very dense and filling, it creates the best texture in layer cakes and quick breads, I have found.

I’ve worked with coconut flour a lot and have learned it is not the most forgiving flour and cannot be subbed in for wheat flour easily, if at all. In baked goods you can’t substitute coconut flour one to one for any other flour called for in the recipe. In fact, most recipes can only accommodate the addition of about 10 to 15 percent coconut flour for other flours without changing every other aspect of the recipe. If you have a favorite recipe to which you are looking to add coconut flour, it may actually be better to find a similar recipe that already contains coconut flour online or in a cookbook and experiment from there.

When using coconut as the main flour in a baking recipe, the first thing you may notice is how little you will actually need. While you might usually use up to two cups of regular gluten-free flour, you will only need two-thirds of a cup of coconut flour. Most recipes that call for coconut flour will also call for another flour to lighten the “crumb” or texture of the final product. I have found that arrowroot or tapioca flour in a one-to-one ratio with the coconut flour produces the best consistency. That means that if you use one cup of coconut flour, you should also use one cup of arrowroot or tapioca flour. Some experimentation is required depending on whether you are making a cake, cookie, muffin, etc.

Eggs also play a critical role in baking with coconut flour because they are needed to bind ingredients. It’s not unusual to find coconut flour recipes with a half-dozen eggs. I’m often asked if you really need all those eggs and the answer is, it depends. If there are no sticky binding ingredients in your recipe such as dates, syrups or binding agents such as psyllium husk or ground flax, the only thing that can hold your finished product together is the eggs.

You may be able to get away with fewer eggs depending on the nature of the baked good. For example, cookies don’t need to be held together quite as much as muffins or cakes. Most cake made with coconut flour, even when paired with arrowroot, tapioca or almond flours, will need about nine eggs to hold it together. This can be quite a shock to the average baker.

And it can raise health questions about cholesterol since eggs have long been considered a significant source. But eggs are making a bit of a comeback. A solid body of research shows that for most people, cholesterol in food has a much smaller effect on blood levels of total cholesterol and harmful LDL cholesterol than does the mix of fats in the diet, according to the Harvard School of Public Health. Recent research has shown that moderate egg consumption— up to one a day—does not increase heart disease risk in healthy individuals and can be part of a healthy diet. Like all gluten-free baked goods, those made with coconut flour and eggs should be seen as a treat and eaten only in moderation.

Coconut oil, also in the health and wellness news quite a bit lately, pairs very well with coconut flour, being that they come from the same source. But they are not mutually exclusive, and coconut flour also works well with butter. (See below for more information about coconut oil)

If you are used to using gluten-free flours and blends, welcoming coconut flour into your roster should not be too difficult. Keep in mind it is much more absorbent than most other flours, has a slight coconut flavor, and needs many eggs to bind it together. But you will enjoy both health and taste benefits by adding coconut flour to your gluten-free baking repertoire.

Elizabeth Nyland grew up on Vancouver Island, on the West Coast of British Columbia, Canada, enjoying all the natural bounty her hunter/fisher/gardener parents could provide. She writes about food on her blog, guiltykitchen.com, and is the author of Cooking with Coconut Oil: Gluten-Free, Grain-Free Recipes for Good Living. She and her husband and two young children enjoy the gluten-free lifestyle.

Tips for baking with coconut flour

• For every ounce of coconut flour called for in a recipe, use one large egg.

• If you use less than the recommended amount of eggs, you will need binders such as flax seed, xanthan or guar gum.

• You may need additional liquid because of the high fiber content.

• Think of coconut flour as being “concentrated.” You need very little for a full recipe.

• Always sift coconut flour before using and never pack it into measuring cups. Use the spoon and sweep method popular with most baking recipes.

• Coconut flour recipes need to sit for 1-3 minutes after the wet and dry ingredients are mixed to allow the coconut flour to fully absorb the liquids.

Phytic acid is produced in certain grains, nuts, seeds and beans. When ingested, phytic acid (also known as phytate) binds to certain minerals like zinc, iron, magnesium, calcium and manganese in the gastrointestinal tract, reducing its absorption into the body. Soaking, sprouting and fermenting can help to prevent this.

Coconut oil is the fat pressed from the flesh of fresh coconuts. Almost all of the fat in coconut oil is saturated, making it highly stable for cooking and baking. Most of the saturated fat in coconut oil comes from lauric acid, which is found in abundance mainly in human breast milk. Lauric acid is anti-viral, anti-fungal and anti-bacterial. Coconut oil is also high in medium chain triglycerides (MCTs), which the body and brain convert to fuel almost as soon as ingested.

In bowl, mix all dry ingredients.

In a separate bowl, mix the wet ingredients.

Pour the dry ingredients into the wet and stir to combine.

Recipe reprinted with permission from Cooking with Coconut Oil by Elizabeth Nyland (The Countryman Press, 2014)