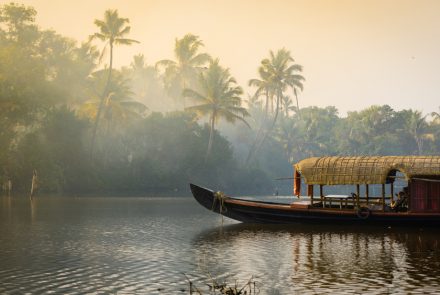 India is a kaleidoscope of different cultures, customs and religions. Goa is renowned for its beaches and full-moon parties, while those in the know also appreciate its eclectic architecture, influenced by hundreds of years of Portuguese colonization. Kerala is famed for its backwaters, an intricate network of palm-tree fringed canals and lagoons. In the sprawling state of Karnataka you’ll discover the historic cities of Mysore and Hampi, as well as the dreamy Coorg district, where most of India’s coffee is produced.

South India’s food culture is just as diverse as the landscape. Each state has a unique regional cuisine, based on its history and the ingredients available locally. One of the most exciting things about a trip to South India is being able to try all these delicious and unique dishes. But faced with so many unfamiliar dishes, traveling gluten free can be daunting. However, you’ll find that many South Indian dishes are gluten free. Unlike North Indian states, which tend to serve curries with roti and naan, many South Indian states serve breads made with rice or chickpea flour instead. Luckily, South Indian curries are never thickened with wheat flour either – ground coconut, cashew paste and chickpea flour are used as alternatives.

Goa has an eclectic cuisine influenced by 450 years of Portuguese colonization. You’ll find variations of Portuguese classics there, including caldo verde and spiced chourico sausages. Pork and seafood are staple ingredients, and many curries and stews are flavored with vinegar, coconut milk and chilis. Despite an influx of international restaurants catering to tourists, it’s still possible to find restaurants serving authentic Goan cuisine.

Sannas are steamed rice cakes made from ground rice paste, coconut flour and a raising agent (traditionally it was local palm liquor, toddy, but now it’s usually yeast). They are often eaten with pork sorpotel; pieces of pork simmered in a rich gravy of chilies, ground whole spices and coconut vinegar.

Xacuti is a delicious and intricately spiced curry that’s both gluten-free and paleo. It’s made from roasted and ground whole spices, such as cloves, cinnamon and mace, toasted coconut, tamarind and chilies. While it’s traditionally served with chicken, almost all restaurants serve a tasty vegetarian version.  Xacuti tastes great with fluffy steamed rice.

If you’re fond of crustaceans you’ll love crab xec xec. Steamed crabs are served with a thick spicy gravy made of ground coconut, chili and whole spices. Again, this can be eaten with steamed rice.

Top gluten free restaurants to check out in Goa

Goa has a lot of restaurants offering gluten-free dishes and menus.

The House of Grains, Panjim

This deli-service is entirely dedicated to gluten-free products, including gluten-free breads and cakes. We recommend trying the Navrathan Bread, made out of millet, red rice and yellow pea flour. The House of Grains cook baked goods to order, and will deliver them to your hotel or villa in the Panjim area. Plans are afoot to widen their delivery around Goa. They can be contacted by WhatsApp message on +91 9960135487.

This beautiful restaurant is tucked away in the quiet village of Assagao. Food is served in a shady outdoor courtyard, with comfortable seating, mosaic walls and plenty of greenery. There’s a dedicated section of the menu catering to vegan and gluten-free diets, including banana pancakes with maple syrup, quinoa salad and gluten-free chocolate cake.

Karnataka is a large state with many regional variations in its cuisine, ranging from the seafood-heavy diet of Mangalore to the spicy vegetarian meals of North Karnataka. However, there are dishes that are commonly found throughout the region, such as dosas and thalis. Unfortunately, a great many dishes contain a pinch of asafoetida (known as ‘hing’ in India), a spice often mixed with wheat flour. However, in tourist hotspots such as Mysore and Bangalore you’ll find restaurants with menus that cater to gluten-free travelers.

Practically every South Indian restaurant you’ll visit offers dosa for breakfast. A dosa is a pancake made from ground soaked lentils and rice, soft on one side and crispy on the other. Dosas are often served with fresh coconut and tomato chutney, a vegetable sambar and a spiced potato filling. Unfortunately, the sambar and spiced potato often contain a pinch of hing, so should be avoided.

If you’re heading to Coorg, make sure you try the region’s specialty, pandi curry. Chunks of pork are simmered in a rich dark sauce of whole spices, chili and kachumpuli, a thick black vinegar unique to Coorg. Try it with akki roti, a delicious flatbread made of rice flour, and often flavored with chopped onions, green chilis and dill.

If you head to Mangalore or the Konkan Coast, make sure you try the city’s famous fish curry (known locally as Meen Gassi). It’s a smooth curry flavored with mustard, curry leaves, fenugreek and a unique ingredient, jaargey, the dried rind of a fruit indigenous to Mangalore. Make sure you enjoy your curry with rice, rather than the neer dosa that accompanies it, since it contains semolina.

Because so many dishes in Karnataka contain hing, it’s worth seeking out restaurants which have gluten-free menus. These will be hard to find in rural areas, but you’ll have no problem in larger cities such as Bangalore, Madras and Mysore. Many of the higher-end restaurants will have waiters with a good grasp of English, who are aware of gluten allergies and will help you with your food choices.

This recently-opened vegetarian restaurant proves that health food really can be delicious. It has an extensive menu that caters to all sorts of dietary requirements, including vegan and gluten-free. Tuck into aromatic gluten-free red curries or delicious pizza made with ‘ragi’ (finger-millet) flour. You’ll also love the decadent gluten-free desserts and refreshing smoothies available.

A chilled-out restaurant with a greenery-filled outdoor terrace, Yogi-sthaan serves up healthy food with soul. It has an extensive menu, but most exciting are the gluten-free items made using indigenous ingredients. One example is the chickpea flour crepe with tomatoes, onions and coriander, served with mint chutney. Another is a breakfast of poha – beaten rice flavored with peanuts, curry leaves and turmeric – served with steaming hot masala chai.

This popular café dishes up tasty vegan and gluten-free dishes made with fresh, locally-sourced and seasonal ingredients. They have a menu of millet-based dishes, including gluten-free ragi dosas and millet khichdi, a popular comfort food made with little millet and split green gram. Rasa Dhatu is attached to the store Dhatu Organics and Wholefoods, so if you’re staying somewhere with a kitchen you can also stock up on gluten-free bread, flour and grains.

Keralan cuisine has been influenced by multiple religions and races, with everyone from the Portuguese settlers to Syrian Christian migrants. Since Kerala is a coastal region, seafood features heavily in Keralan food, as does fresh coconut and the aromatic plantation spices grown in the region, such as pepper, cinnamon and nutmeg. Red meat, including beef, is also eaten in the state. As in Karnataka, asafoetida is sometimes used as a flavoring in cuisine, but there are plenty of gluten-free dishes you can try.

One of Kerala’s most popular breakfast foods is puttu and kadala curry. Puttus are steamed cylinders of coarsely-ground rice flour, layered with grated coconut. They’re often served with kadala, a spicy black chickpea curry made with chilies, grated coconut, bay leaves and cloves. Kadala curry is also sometimes served with parotta, but these flaky flatbreads that should be avoided, as they contain flour.

This is a popular Syrian Christian dish that you must look out for in Kerala. Appams are fermented rice pancakes, with a fluffy centre and crispy edges. They’re often served with a stew (ishtu) of vegetables, chicken or mutton, in a coconut-milk gravy infused with curry leaves and whole spices. The stew is especially delicious when made with freshly squeezed coconut milk.

Kerala Beef Fry (also known as beef ularthiyathu) crops up on a lot of restaurant menus. Since cows are considered sacred in India, the vast majority of ‘beef’ dishes you find are made with water buffalo meat, and this is no exception. Chunks of beef are marinated in a spicy paste of fennel, turmeric, star anise and other spices, then cooked with vinegar and slivers of coconut. It’s a delicious dish that can be eaten with rice or appams.

Push the boat out with a meal at the best fine-dining restaurant in Cochin, The Rice Boat. It’s located at the Taj Malabar Resort & Spa on Willingdon Island, and offers spectacular river views. You can savour dishes such as crab sautéed with pepper masala, and prawn moilee – a spiced coconut milk curry. Because it’s such an upmarket restaurant, the chef is happy to tailor the menu to your dietary requirements.

The Ginger House is a colorful restaurant built with antique materials, adjoining the Heritage Arts Museum. It serves international cuisine and Keralan favorites such as appams and curries. The restaurant also specializes in ginger-based dishes, including ginger-grilled fish and ginger ice cream. Attentive staff will ensure the dishes you choose are gluten free.

Dani Redd is a British food and travel writer living in Bangalore, with bylines in National Geographic Traveller India, Ethos Paper, Culture Trip and many more. Her husband was recently diagnosed with gluten intolerance, so she is becoming increasingly aware and educated of the gluten content in food.