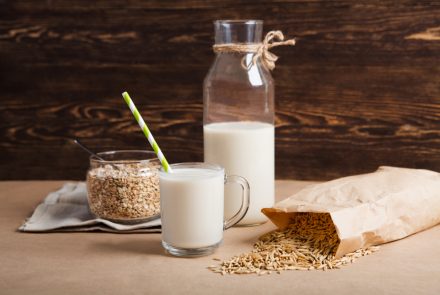 When my daughter turned 1 and it became time to transition from formula to cows’ milk, I immediately noticed that something was off. We experimented for a few weeks, talked to doctors and “poop talk” dominated most conversations in our house.

Finally, a friend suggested trying out oat milk. Oat milk? I had never heard of this. The nutrients are decent, including fat content and vitamin D. It’s also gluten free. Did I mention it tastes amazing? Everything was going well after we adopted oat milk into our daily diet. She was growing well, hitting all those milestones and chugging down her milk. Then, I learned some information about an ingredient contained in a few oat milk brands that gave me a serious case of mom guilt.

My best friend was visiting from Chicago and, as usual, most of our conversations veered toward food. Almost immediately upon her arrival, she let me know that she had learned something about oat milk that I needed to know right away. She told me there are some brands of oat milk that contain the ingredient rapeseed oil, including the brand we had been giving our 20-month-old for the past six months.

What is rapeseed oil?

Rapeseed oil is actually very similar to canola oil and the two are often confused. Rapeseed oil was banned from human consumption in the 1950s due to high amounts of erucic acid. Erucic acid makes the plant bitter tasting and, according to the European World Safety Authority (EWSA), has been found to cause heart complications in mice. Not long after, varieties of the plant were developed containing much lower levels of erucic acid. Oil was made from the new versions of the plant and it was dubbed canola oil. Erucic acid is regulated in foods today and the maximum amount of erucic acid permitted in canola oil (or any product) is 2 percent.

It is common to hear the terms rapeseed oil and canola oil used interchangeably, primarily in countries outside of the US and Canada. This explains a lot. A popular oat milk brand comes from Sweden and contains rapeseed oil as a main ingredient. Rapeseed or canola oil is what gives the milk that smooth, creamy texture. Now it’s starting to make sense. I already knew canola oil was not the greatest product to consume and after learning more I was uneasy about it being the first ingredient in something I thought was healthy for my family.

Is it healthy or unhealthy?

I did some research and found conflicting information. There are many articles preaching the health benefits of rapeseed/canola as a great oil alternative with good fats. On the other hand, according to Healthline, canola oil is highly refined, usually contains GMOs and can lead to inflammation due to high levels of omega 6 fats. It can also have a negative impact on memory and heart health.

I found evidence from the EWSA from test done on animals “showing that ingesting oils containing erucic acid over time can lead to a heart condition called myocardial lipidosis. This is temporary and reversible. Other potential effects observed in animals – including changes in the weight of the liver, kidney and skeletal muscle can occur when higher doses are consumed.”

The study goes on to warn that there could be a health risk for children under the age of 10 who consume products containing erucic acid regularly over time. Although canola oil contains very low levels of erucic acid, this cannot be good.

Sara Monk, a registered dietitian, warned that “it is important to choose milk that does not contain any type of vegetable oil… These highly processed oils contribute to inflammation, calcification of arteries, and heart disease to name a few. Vegetable oils, once thought to be healthy, wreak havoc in the body. These oils are processed with toxic solvents and in the refining process become partially hydrogenated, which causes negative health effects. Most vegetable oils are also heavily sprayed with pesticides and are GMOs. This is not something I’d like to put into my child’s body.”

What about oat milk’s claim to be gluten free?

Many U.S.-based companies have recently come out with oat milk which do not contain rapeseed oil. However, since doing more homework on oat milk, I have learned that some brands are not using gluten-free oats, thus making the drink unsafe for the gluten sensitive. Even if the brand does advertise that it is gluten free, there is a risk the oats have been cross-contaminated with other gluten containing grains processed in the plant. Also, the U.S. Department of Agriculture Pesticide Data Program has found evidence of traces of pesticides in oats. Since most oat milks are not organic, it is necessary to look for ones that use not treated with any harmful chemicals.

“The only way to be sure oats have not been processed or treated with pesticides is to purchase organic. Be sure to avoid conventional oats,”Monk said.

What do the experts have to say?

“Oat milk can be a healthy alternative for individuals who are allergic or intolerant to dairy and/or nuts or even if an individual is looking to lower saturated fat in their diet by switching to plant based foods,” said registered dietitian Danielle Colombo. “It is lower in protein compared to soy or cows milk, but compared to other plant based beverages (almond, cashew, rice, coconut), it has more protein. Oat milk beats all of the other milks when it comes to fiber at 2 grams of dietary fiber per serving. It’s also very easy and affordable to make at home if you’re worried about where your oats are coming from.”

Colombo said it’s important to note that moderation is key when it comes to store-bought oat milk. “Oat milk can certainly be part of a healthy diet as long as you’re doing your research.”

Now we know what to look in oat milk, for but is there anything specific to avoid? Of course there is.

“The number one concern in dairy-free milk is the added sugar,” Monk said. Also be aware of the additives and preservatives such as carrageenan, vegetable oils and emulsifiers (guar gum and xanthum gum). “A long ingredients list of words you cannot pronounce is typically a red flag,” Monk said.

Choosing the right milk can be daunting, especially if it’s for your little one. Taking the time to do some research and get the facts straight helped me to make my choice and find what works best for my family. Do your research when trying something new and remember moderation is key!

Cara Pagan has been gluten free for more than six years and enjoys sharing her knowledge and experience about her lifestyle. She blogs at Hotmess to Homemade, which features advice, tips and recipes for fellow moms.