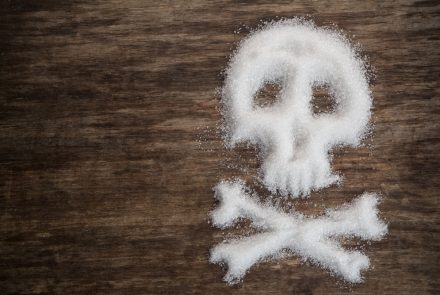 Added sugar, it seems, is everywhere, from your morning coffee creamer to your afternoon yogurt. As the name implies, they are added to products during processing. They can lead to weight gain and raise blood triglyceride levels, which contribute to heart disease. In this edition of Not Just Gluten Free, learn about the health effects of added sugars, how to find those “sneaky” sources on a food label and discover ways to reduce your intake without sacrificing taste.

“Many patients struggle with weight gain when they start eating gluten free, and overeating sugar could exacerbate the problem,” says Lori Welstead, registered dietitian at the University of Chicago Celiac Disease Center. Added sugars tend to be “calorie dense;” that is, they contribute calories but lack beneficial nutrients.

The effects don’t stop on the scale, however. While it seems counterintuitive since sugar provides a short-term rush, overeating sugar can sap your energy. According to Melinda Dennis, registered dietitian and nutrition coordinator for the Celiac Center at Beth Israel Deaconess Medical Center in Boston, “Many of my patients who eat a lot of refined products complain of low energy and sluggishness.” Welstead agrees. “I think most find they have more sustained energy when they eat less sugar,” she says.

Dennis also sees gastrointestinal consequences in patients who overdo sweetened foods or beverages. “Excess sugar can cause loose stools in some people,” she notes. “I caution my patients about drinking too many beverages like sweet tea, especially if they are also going to flavor coffee with sweetened creamers or syrups, for example.”

Finding added sugar on the label can be tricky, as it may be listed under other names. From high-fructose corn syrup to dextrose, added sugar can take many forms (see below). A quick scan of the ingredients list can be helpful when trying to reduce sugar intake. “I ask my patients to see where in the ingredient list sugar is located. Is it high up on the list?” says Dennis. Because ingredients are listed from those with the most amounts to the least on the label, the closer that sugar is to the top of the list, the more the food contains.

While cookies, cakes, soda, ice cream and sports drinks are all obvious sources of sugar, it is also found where you least expect it. For example, just one tablespoon of ketchup contains about 4 grams, or about one teaspoon, of added sugar. Some flavored yogurts contain 20 grams or more of added sugars, which is equivalent to about five teaspoons. Sweetened breakfast cereals can also pack a sugary punch—depending on the brand, there can be 10 to 12 grams of added sugar. “The one that always seems sneaky to me is pasta sauce,” says Dennis. “It doesn’t need sugar in it.” Some brands of pasta sauce contain 10 grams of added sugar.

The Nutrition Facts panel does note the total number of grams of sugar in a product, but currently, manufacturers are not required to list whether the sugar comes from an added or natural source. However, with the recent focus on sugar and its potentially negative impact on health, the newly revised panel will mandate that manufacturers list the amount of added sugar in the food. This information should prove helpful to consumers who are trying to reduce their added sugar intake. Food companies have until 2020 to comply with the new panel, although many have already changed their packaging to reflect the change.

There is no shortage of gluten-free sweets available to those with celiac, and it can be challenging to say “no” to these treats. “Soon after I was diagnosed, even as a dietitian, I went through some ‘mourning’ over the loss of my favorite foods that I would no longer be able to eat for the rest of my life,” recalls Welstead. “I fell into the rut of finding random foods to replace my old favorites and feeling sorry for myself. Initially, my cabinets had all sorts of unhealthy foods, even though I knew better.”

Dennis notes that cooking can seem like a hassle for many. “A lot of people don’t know how to cook or just aren’t interested,” she notes. “It takes time, too. For example, moving from a sweetened gluten-free oatmeal packet to a hot cereal they make from scratch only adds minutes to a busy morning.”

Keeping convenience in mind, are there easy ways to reduce added sugars in your gluten-free diet? “I recommend my patients read the labels and avoid sugar in those first few ingredients,” says Welstead. “Focus on removing sweetened beverages whenever possible, including juice, soda, sweetened tea, or sugar and syrup in coffee.” Dennis encourages a whole foods approach. “My first question to my patients who want to reduce their sugar intake is ‘are you eating gluten-free whole grains?,’ which helps to get away from excess added sugars in more processed gluten-free grain foods.” Substituting healthier choices for sweetness helps, too, she notes. “Small amounts of unsweetened dried cranberries, frozen blueberries, dates [avoid those rolled in oat flour] and pure maple syrup all provide sweetness without excessive sugar,” says Dennis. “When somebody is upset that they need to reduce added sugar, I also bring out dates, figs, golden raisins, blueberries and raisins, which at least are real foods with other health benefits. Cardamom and cinnamon also bring a bit of sweetness in recipes.”

Where do artificial sweeteners such as aspartame or stevia fit into the gluten-free diet? They are gluten free and safe to use, but do they have other side effects that aren’t so sweet, such as weight gain or cravings? Recent headlines have warned that the use of sugar substitutes may lead to extra pounds, but these are based on studies that show association only, not cause and effect. Some experts have also expressed concern that using artificial sweeteners may make natural sugars, such as the ones found in fruits and vegetables, less sweet and less satisfying.

Sugar alcohols, another type of sweetener, may have gastrointestinal consequences even though they are gluten free. Eating a significant amount of foods made with sugar alcohols such as xylitol, mannitol and sorbitol can cause gas, bloating and diarrhea. They are frequently found in sugar-free mints, gums, candy and even in some medications.

While some feel a rush after eating a candy bar or a quick burst of energy after drinking a soda, does this equate to addiction? Some think so, but the idea of sugar addiction remains controversial. “Addiction is a powerful word; I hesitate to use it. I believe strong sugar cravings are a real thing,” notes Dennis. “By reducing added sugars, many people can move past those cravings. It takes about a month, but eventually sugary and sweet foods taste very different, and people no longer find them as appetizing.” By reducing added sugar, you may also eliminate swings in blood sugar levels. When blood sugar levels drop, cravings for sweets may increase.

It is difficult for most kids to say no to sweet foods, but some strategies may help. “Get kids involved in the gardening and cooking process,” suggests Dennis. “I also encourage parents to be a good role model concerning their own sugar intake.” Welstead admits that change is difficult, and encourages parents to find the middle ground. “Try to cut out all soda and juice, which allows for sweets to be a treat,” she advises. “If you get about 80 percent of your diet from healthier stuff, such as fruits, vegetables, beans, nuts, seeds, lean meats and poultry, it allows for wiggle room for those treats.” Having flexibility allows parents to balance the other restrictions for their kids. “I enjoy a gluten-free donut two to four times per month,” says Welstead. “Life is too short, and with being strictly gluten free, having that flexibility in other areas makes it easier.”

How much sugar is safe?

By any other name

Finding added sugars in an ingredient list can take a little detective work. Here are some other names for added sugars you might see.

*Note that even though many consider honey and maple syrup to be “natural” sweeteners, the U.S. Food and Drug Administration currently considers them to be added sugars (although how they will be labeled is still in review). This is because they are typically used as a condiment or are added to another product for sweetness. In addition, they are not sources of significant nutrients.