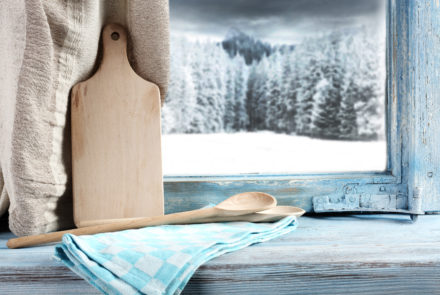 Visit any bookstore in the month of January in search of the ideal New Year’s diet, and you’ll be greeted by shelves of diet books, each promising the answer to seeing small numbers on the scale. Americans spend more than $60 billion dollars every year to lose weight. The average dieter attempts to follow a weight-loss plan four times a year. Despite our best efforts, however, dieting has been shown to be extremely ineffective. Rates of being overweight and suffering from obesity continue to increase in both adults and children. Others develop disordered eating patterns. While diet books and products continue to drive big business, research shows they do nothing to help improve weight and health in the long term.

Is there a better way? Intuitive Eating and mindful eating are “non-diet” approaches backed by research and now making headlines as ways to improve your relationship with food and more naturally manage your weight for life.

A combination of factors likely leads to weight gain on the gluten-free diet. Many gluten-free products are higher in fat and calories than their gluten-containing counterparts. Also, those with undiagnosed celiac disease experience malabsorption, making it possible to eat bigger portions without gaining weight. After diagnosis and treatment commences, the body absorbs food better as the intestinal lining heals, often leading to added pounds on the scale.

What can those on the gluten-free diet do to prevent or manage unwanted weight gain? The answer is not as simple as counting calories. Most people who go on a traditional diet gain the weight back, plus a few extra pounds, within five years. In fact, multiple studies on children and adults show that those who diet are at risk for further weight gain.

Dietitians Evelyn Tribole and Elyse Resch published the book Intuitive Eating in 1995 after both became frustrated with how traditional diets failed their patients. Now in its third edition, the book takes a radical look at the ineffectiveness of traditional diets. Tribole explains, “When we diet, we are not connecting with our bodies. We are no longer listening to our hunger and fullness cues.” Research backs this way of eating. “There are 60 studies that show benefits,” says Tribole. “Many have shown that those who practice Intuitive Eating have a lower body mass index (BMI).”

Successfully following this “non-diet” approach usually involves taking a step away from the scale. This can be challenging for someone who wants to measure success by numbers, but it’s important. “We live in such a weight-focused culture, and we want instant gratification by seeing pounds go down on the scale,” notes Tribole. “But it’s a paradox. If you focus on weight as your measure of success, it takes you away from Intuitive Eating and connecting with your body.” Cheryl Harris, RDN and mindfulness coach at Harris Whole Health, agrees. “Mindful eating isn’t a quick fix, and it isn’t likely to be a good fit for someone with a specific weight goal timeline.”

Both Tribole and Harris stress that it’s important to reject the traditional diet mentality altogether. This is often easier said than done, but it’s the first step to improving your relationship with food. Harris says, “Usually, weight management is about following certain rules or avoiding certain foods. This takes willpower and often gets harder over time.”

Most people are emotional eaters on some level, and some degree of emotional eating is normal. Commercials for chocolate, for example, often equate eating with relaxation, reward or even love. How often have you rewarded yourself with ice cream after a bad day? Food plays a part in many emotional experiences, from the joy of a wedding or family Christmas dinner, to the sadness of a funeral luncheon. And while we know that negative emotions such as stress, anxiety, frustration, anger or depression can trigger emotional eating, positive emotions like success, love and excitement can also lead to eating when not physically hungry.

Emotional eating can vary in intensity, says Tribole. For some, she says, food can be a simple distraction when bored, but for others, it may be the only coping mechanism they have to deal with negative emotions. This can even lead to the more serious eating disorders of bulimia or binge eating. Dieting itself can lead to strong feelings of deprivation or frustration, which in turn feed the cycle of using food to deal with those negative emotions.

Harris encourages her clients to note what leads them to eat. “Keep track of what’s driving food consumption for a week,” she says. “Are you hungry What do you notice in your body? If you’re not hungry when you eat, what do you need?” After tracking this for a week, patterns can start to emerge. For example, if you are a late-night eater, can you simply go to bed to get more restorative sleep or distract yourself in non-food ways? Here are some suggestions:

Traditional diets often fail because they demand that you ignore your physical hunger. By artificially restricting calories, you can quickly lose touch with the feeling of gentle hunger. Ironically, ignoring the early signs of hunger can lead to overeating. “For someone who is so stressed out and disconnected from their body that they can no longer hear hunger and fullness signals, Intuitive Eating can be empowering,” says Tribole.

Early research on the effects of food restriction occurred during World War II. Dr. Ancel Keys showed the dramatic effects on 32 healthy men who were required to lose 19 to 28 percent of their starting weight over a six-month period. This involved cutting their typical calorie intake in half. The alarming results likely mirror what many people experience when dieting. The men’s metabolic rates decreased by 40 percent, they became obsessed with talking about food and collecting recipes, and had intense food cravings. Several of them binged on food when given the chance, while others exercised excessively just to get more food. The study also noted personality changes, with many of the men suffering from irritability and depression. After the study concluded, the men ate a lot—sometimes 5,000 to 10,000 calories at a time—and it took many months to reconnect with the hunger signals that they had ignored.

Each time you eat, Tribole advises, check in with yourself to see how hungry you are. Signs of hunger include gentle growling or gurgling in the stomach, all the way to more ravenous sensations of lightheadedness, headache or irritability. If you’re just starting out and not sure if you are feeling physical hunger, Tribole suggests a guideline of not going more than five waking hours without food.

We’ve likely all experienced eating until we are “stuffed.” Regularly eating beyond the point of comfortable fullness is typically not a pleasant physical experience. Both Intuitive Eating and mindful eating allow us to more effectively tune into our fullness signals. “By eating mindfully, people often recognize that eating certain foods or large quantities of food doesn’t feel as good,” says Harris. “It’s much easier to stop eating because you recognize you’re satisfied than because a diet says you should.”

For those raised in the clean-plate club, cueing into fullness signals can be tough. Feeling the need to clean your plate may make you eat on autopilot, stopping when the food is gone without regard to physical fullness. In contrast to this, Tribole states that occasionally pausing to assess fullness during the meal can help you find the comfortable spot where you are no longer hungry, but instead satisfied without being overfull.

Benefits for Those on the Gluten-Free Diet

Tribole says the gluten-free diet can present its own challenges in regards to Intuitive Eating. “Being new to the gluten-free diet is daunting,” she notes. “My son was diagnosed with celiac disease when he was a toddler, so we went through that adjustment at home, and I know how tough it can be.” Tribole recommends focusing on the nuts and bolts of gluten-free eating first. “It’s important to get through the stage of being overwhelmed,” she advises. “I encourage a sense of patience during this time.” She also encourages her patients to prioritize what food experiences are most important to them. “What do you miss most? Is it a favorite restaurant? If so, let’s find strategies that may work,” she advises. “Is it eating at a less busy time, or getting to know the manager?” After a person adjusts more to the gluten-free diet, then she recommends working on Intuitive Eating. “For example, if you aren’t yet comfortable eating gluten free in a restaurant, this might cause you to go without enough calories or food altogether,” she cautions. “This may cause your blood sugar to drop, which might set you up to eat more than you intended later on.”

It’s great for kids on the gluten-free diet too, Harris says. “Encourage them to notice the food, and what they observe. Is it crunchy, mushy, chewy or stringy? Is it sweet, sour, tangy or bitter? When a child is engaged in the sensory experience, it’s typically more interesting and can help expand a picky palette.”

Harris says that mindful eating may help those on the gluten-free diet cope with emotions. “People who eat gluten free may feel more deprived, especially when they’ve just started the diet. Eating more mindfully can translate into more enjoyable meals, experimentation with new foods and exploring the presentation of foods to make them more appealing, too.”

Both Tribole and Harris provide suggestions for approaching mealtimes. Tribole advises allowing yourself to have whatever food would really satisfy at a given time. “On a cold wintry day, a bowl of chili might be what your body wants, while in the summer it may be a crisp salad. Ask yourself, ‘What is it that would make this meal a little more enjoyable for me?’” Harris encourages gratitude before meals. “This can be the classic saying grace, or it can be thanking the cook, shopper or even gardener for the food served at the meal.” She also encourages minimizing distractions at meals, especially electronic ones. Both encourage a pause before eating. “Take a couple of relaxing breaths,” says Tribole. “How hungry am I?”

Of course, along with food, exercise plays a role in weight management. However, when people start out exercising just to burn calories, they often pick activities that they don’t enjoy and won’t stick with. Add to that a low-calorie or low-carbohydrate diet, and you might not have enough energy to exercise at all, let alone enjoy it. Instead, Tribole recommends what she calls “joyful movement”—in short, moving your body in ways you enjoy and through activities you enjoy. Whether that’s walking, dancing, running or yoga, exercise should help you deal with stress, not cause it. Remember that climbing stairs instead of using the elevator, taking the dog for a walk or riding your bike to work all constitute forms of activity that don’t involve a gym membership or “feeling the burn.” Exercise should never be viewed as punishment for eating, and it doesn’t have to hurt to be effective.

Resolve to Think Differently This Year

So, instead of resolving to start yet another diet that will leave you disappointed, consider a new approach. Honor your body when it is hungry by feeding it appealing and satisfying food. Pay attention to the feeling of fullness when it is subtle and before you are uncomfortably stuffed. Find movement that makes you happy and that you are motivated to do. Step off the diet carousel this new year and into a happier, healthier you!

Amy Jones is a registered dietitian and celiac disease support group leader in Ohio. She is the chair of the Dietitians in Gluten Intolerance Diseases practice group for the Academy of Nutrition and Dietetics. She also serves on the dietetic advisory board of Gluten-Free Living.